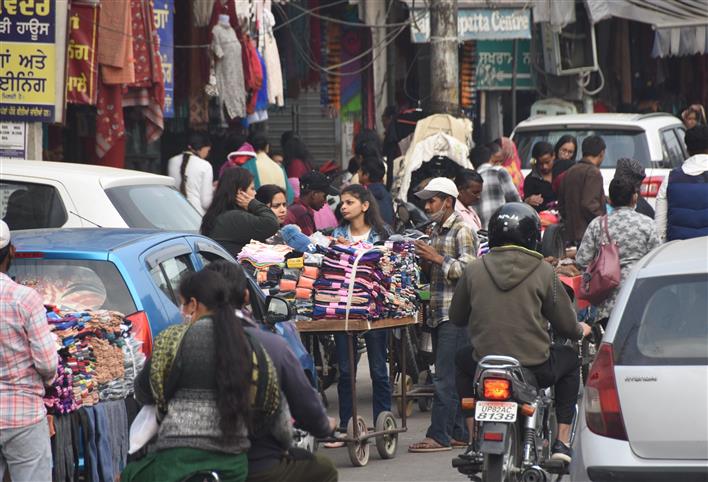 Taking advantage of the poor vigil and lack of corrective measures by the Municipal Corporation against road encroachments, many residents and commercial establishments have extended their structures and occupied roads. As a result of which, at some points roads have become so narrow that plying through such areas is next to impossible. Keeping in view that encroachment of roads leads to congestion of traffic, offenders should be penalised without exception and encroachments be removed.

To resolve the problem of traffic jam, the police have been regularly launching campaigns to remove encroachments by roadside vendors and rehriwalas and registering cases against erring shopkeepers. The issue can’t be resolved as such unless an alternative place or ground is allotted on a reasonable lease basis to such persons, who can’t afford to buy or take on rent shops to earn livelihood. The smart city needs to extend parking areas across major markets of the town and improve cycling infrastructure to promote people using bicycles instead of motorised vehicles.

The careless attitude of vendors and shopkeepers, especially auto-rickshaw drivers, are creating hindrance in the smooth flow of vehicular traffic. The police and NGOs must hold seminars or campaigns to make them aware of traffic rules. Auto-rickshaw drivers randomly stop their vehicles anywhere on roads without giving any signal, risking other commuters. Heavy fine should be levied on them to ensure safety of commuters.

Roads, pavements, streets and markets in the city are encroached upon by shopkeepers, hawkers and people for social or religious functions. It leads to traffic jams and inconvenience to commuters. Prime locations are encroached upon by offenders under the nose of the local authorities. Sometimes, government officials have to stop encroachment drives due to political interference. The authorities should allocate separate space for hawkers. There must be regular visits of officials to all areas to check any encroachment. The charge must be given to private agencies to avoid political interference as it is done in the case of towing away of vehicles by the traffic police. Heavy fines should be imposed on encroachers. People should cooperate with the local authorities in this mission.

It is commendable on the part of the administration to carry out drives for the smooth flow of traffic in the city. But the ultimate onus lies primarily upon residents. We people forget about rules and regulations and many a times even take pride in flouting the same. This type of attitude requires an immediate change. As responsible citizens, we must obey traffic rules and avoid encroaching upon roads which leads to hindrance in the smooth flow of traffic. Above all, we must develop a sense to park our vehicles in a proper manner to help regulate the traffic. The administration too should continue its efforts of easing the traffic flow in the city.

Check violations on a regular basis

Everyday we see encroachments by the roadsides at various places in the city, which create problems for commuters who

fail to reach their destinations on time. Hence, the authorities should provide proper space for parking, vends, rickshaw stands, etc. There must be regular checks on violations and proper fine should be imposed on repeat violators.

Provide space to vendors in every locality

Encroachments by roadside vendors have always been a matter of concern. These create hindrance in smooth flow of traffic. The vendors are also forced to take such steps due to lack of proper space for their vends. They are doing the same for earning livelihood for them and their families. The government must provide proper space for them in every locality. The vendors should form unions for cleanliness and maintenance of space provided to them. There are vacant plots and unused buildings in the city which could be utilised for the same.

Traffic congestion is now a major problem in the city. The number of vehicles on roads has seen a drastic rise in the city but the police with their existing manpower have failed in regulating the traffic. More traffic police personnel are needed. Traffic chaos is more during morning and late hours. At night, heavy vehicles create traffic snarls at many points. Traffic congestion has also increased due to the ongoing development projects under the Smart City. The Municipal Corporation and the police should prepare a traffic management plan for the city. The tehbazari wing of the MC should clear encroachments on roads. It should be ensured that CCTVs installed in the city are in working condition to keep a check on traffic violations. PCR personnel should be deployed at points witnessing frequent traffic congestion. Commuters should be made aware of traffic rules through rallies and seminars. Traffic signals should be installed at busy chowks. When politicians visit the city, the police should divert traffic in a planned manner to avoid any traffic snarls.

Illegal parking eats road space, leading to long traffic jams. To ensure that people are following traffic as well as parking norms, there should be strict implementation of rules. Also, there is a need to create better parking facilities to reduce traffic jams. Corruption is one of the reasons of non-implementation of traffic and parking rules. The administration should form teams to regularly check illegal parking in markets and on roads.

Rules and regulations can’t yield results till they are implemented strictly and the public at large fully cooperate. The MC deserves praise for taking bold steps in past years for clearing encroachments and widening roads. People should change their mindset. When the MC teams visit city areas, encroachers disappear and when the former leave, they return to their spots. To let such people change their attitude; the authorities should make them aware and provide strict punishment to habitual defaulters.

Cops should continue their efforts

“Roadside encroachments by shopkeepers and vendors and wrong parking of three-wheelers and other vehicles block roads and make it difficult for pedestrians even to walk. The police have done a commendable work in removing encroachments on roads by shopkeepers in some shopping centres such as Chaura Bazaar but the menace continues to exist in many other such places and on roads in internal parts of the city. The police must take it as their responsibility to check encroachments by shopkeepers and roadside sellers and traffic jams by three wheelers and cars in all markets and roads in the city. People must also be reminded time and again not to add to this menace as the issue is in their own interest and convenience. People staying and doing business in such areas must also participate in the cause. The police must be strict and defaulters must be punished with fines.”

In big city of Ludhiana you cannot find any road without encroachments. Every shopkeeper in the industrial city feels that public place is a free land for him or her to use for personnel purposes. They ignore orders of the district administration. People have started big businesses of selling garments and other items at places which they have illegally occupied. Parking by the roadside becomes a major hurdle for the smooth vehicular traffic. Thousands of auto-rickshaws have become the major cause of traffic jams. The government must show courage to stop violations. Stringent laws should be made to curb it.

Roads are flooded with vehicles. Wrong parking of vehicles is a major cause of traffic congestion. Awareness campaigns should be organised to educate people. If we become sincere towards traffic rules and park our vehicles at parking lots, the traffic problem will be solved to a great extent. To avoid hardships, advance planning and a few precautionary steps can be helpful in regulating the smooth flow of traffic near busy shopping centres. It will provide relief to residents living in adjoining localities. Launching car-free days, mending driving behaviour, fixing speed limits, restricting minors and those without licences to drive vehicles are some helpful measures.

Traffic chaos is a big issue that everybody is facing nowadays, especially in Ludhiana. It is happening mainly because of two reasons. Firstly, shopkeepers encroach upon space in front of their shops and on roads to sell their goods, which is also visited by buyers due to which commuters face inconvenience. Secondly, people park their vehicles on roads in front of such points and food stalls to buy various items. It is the responsibility of both residents and vendors to think about commuters who got stuck in traffic jams due to the menace. Shopkeepers should take the responsibility of parking of customers’ vehicles so that the commuters could not face any problem on roads. Through such steps, traffic can be controlled on roads.

Politicians should not interfere in MC drives

Hassle-free traffic movement in Ludhiana is a dream for motorists commuting in the city. Almost all shops have either encroached upon public space for commercial purposes or parking. It can be improved with the help of councillors concerned. In a democracy, consultation and consensus are a tool to solve any problem. They can persuade traders to fall in line. The police should play their role evenly to remove encroachments. Local politicians should stop their interference in Municipal Corporation-led drives to clear encroachments. Traders should be made aware about benefits of free movement of traffic in the city.

As the Punjab Assembly elections are approaching near, various sections of society are up in arms against the present dispensation and are resorting to protests, mainly by blocking roads and highways. The impunity with which the public is held to ransom by such protesters has put a question mark on law enforcement agencies, which usually turn mute spectators, allowing even a handful of protesters to block the public passages. What should be done to avoid public harassment due to protests?

Suggestions in not more than 70 words can be sent to