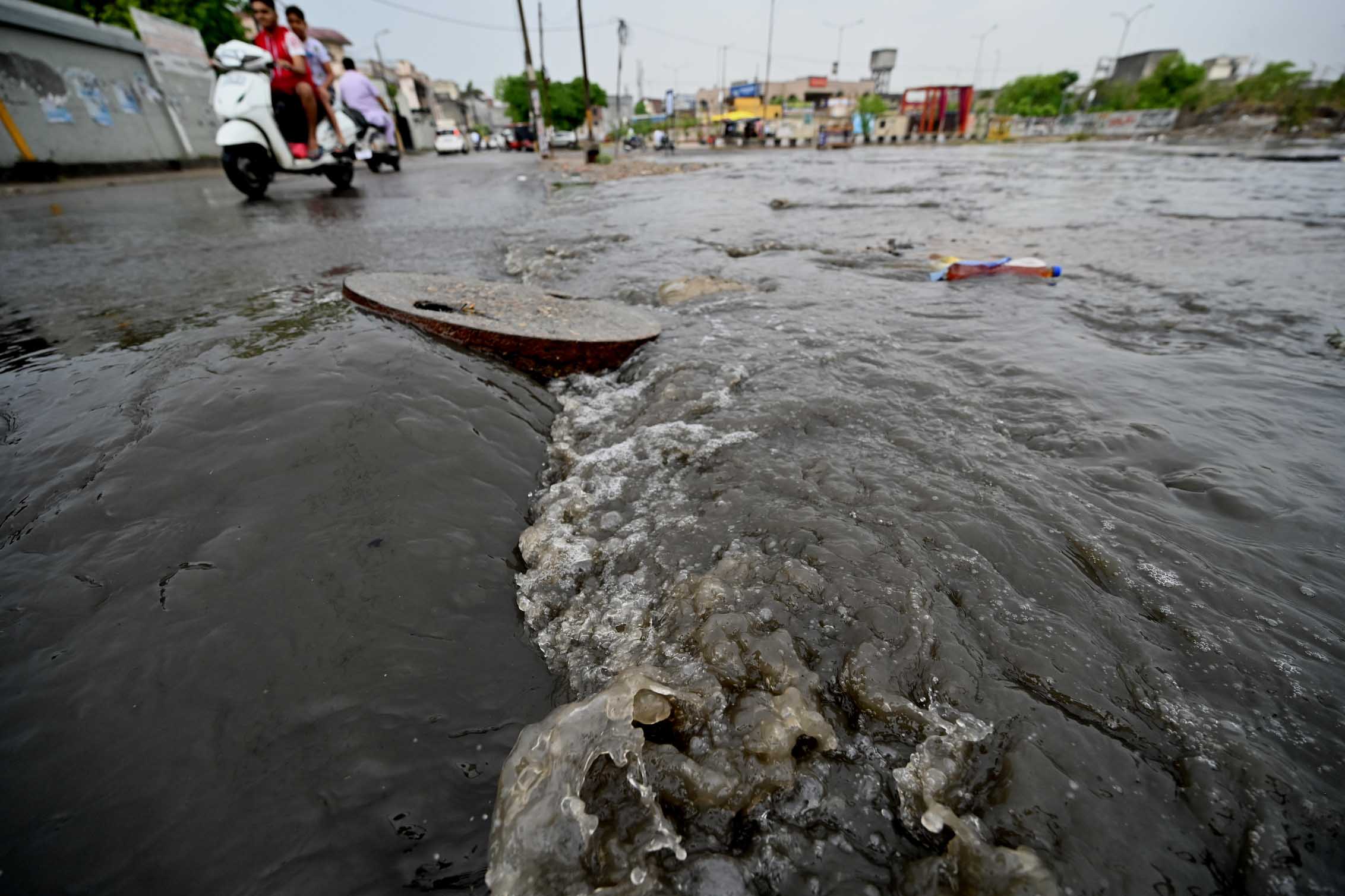 Dirty water overflows from a manhole in Ludhiana. - File photo

Authorities should act in advance

Undoubtedly, rains do provide some reprieve from the scorching heat. At the same time, rains throw life out of gear in most of the localities as commuting becomes a herculean task due to waterlogging. If the Municipal Corporation recognises that water stagnation is a regular phenomenon every rain and it acts ahead of time by cleaning drainage system and not allowing accumulation of garbage in the open, waterlogging problem can be addressed to some extent.

MC does little to address problem

Rain creates trouble for commuters every year, but the MC does little to address the problem. Waterlogging and potholes on roads increase the chances of accidents. In the larger interest of public, the MC should get all manholes, sewerage and drainage pipes cleaned before the arrival of monsoon. Waste management and cleaning of drains should actually be a priority before the monsoon. If the waterlogging problem is addressed, vector-borne diseases will also diminish considerably.

Responsibility lies with people too

Waterlogging is common in the monsoon season. There is a need to take appropriate measures to tackle this problem. The Municipal Corporation should ensure proper drainage and sewage system and carry out its checking from time to time. The MC should forms several teams to the inspect areas prone to waterlogging. People must be well aware of their vicinity and take responsibility to deal with the waterlogging problem.

Leave some unpaved portion along roads

For a short-term solution, the MC must ensure that roads and streets are in a good condition by filling pits and ditches beforehand, avoiding any waterlogging in them. It should check and ensure that drains aren’t blocked. The civic body should leave some unpaved portion along both sides of the roads, allowing maximum water to seep into the ground. In a long run, it should take initiatives to install rainwater harvesting system in localities.

We cannot blame the Municipal Corporation every time. We need to understand that employees working in the MC are also human beings like us. Though they try their best to check waterlogging, sometimes there is more than normal rainfall, which leads to waterlogging. It is the duty of residents also to clean drains in and around their houses. We should make sure than garbage is not dumped in the drains. In Canada, people are instructed to clean their passages as well as the area around their houses in case of snowfall. If they don’t do it, they are fined. The MC should adopt such practice to force people to keep the drains clean. We need to understand that only joint efforts by city residents and the MC can only solve the problem of waterlogging.

The MC is not only responsible for waterlogging problem. Citizens should also take the responsibility of keeping the city, roads and drainage clean. They should not dump garbage or anything directly in the drains. Waste should be dumped in dustbins. The MC should also clean the drains from time to time so that the waste is not accumulated there.

Recent showers exposed the poor drainage system across the city as a few hours of rain flooded the roads. This clearly shows the poor maintenance of drainage system across the city. Moreover, the condition gets worsened with the roads having huge potholes. Rainwater accumulates on potholed roads, which not only poses a threat to motorists, but also increases chances of vector-borne diseases. The MC should inspect and evaluate the condition of the drainage system. It should also fill potholes to safeguard the lives of citizens and prevent the spread of any vector-borne disease.

Waterlogging is a common problem that persists every year during the monsoon. Water accumulates on roads due to improper drainage system. The local government should construct roads after laying proper pipes for the drainage of rainwater. Nobody should be allowed to dig roads. We must not throw waste on roads. This may be one of the reasons behind accumulation of water on roads. People should lend their support to the local government to curb such problems as accumulated water may be one of the main reasons behind diseases such as malaria and dengue.

The recent spell of rain has once again exposed the ill-preparedness of the civic body and negligence on part of Municipal Corporation officials to tackle the waterlogging problem in the city ahead of the monsoon season. To check this problem, the Municipal Corporation should take necessary steps immediately for proper disposal of rainwater. The roads should be well designed for drainage of water. Availability of the rainwater harvesting system should be necessary.

Every time there is a downpour, roads get waterlogged, sewage spills onto roads and water enters houses and shops in the low-lying areas. Though the monsoon brings a cheer to farmers and gives an impetus to the economy, it brings misery and diseases for the common man.

Instead of chasing the dreams of Smart Ludhiana, the authorities should focus on dealing with the waterlogging problem. The administration should make sure that good drainage system is in place to check the problem. Drains should be cleaned before the arrival of monsoon. It is also the duty of residents to keep the drains in and around their houses clean. We should not throw garbage in drains, which blocks it and leads to waterlogging during the rainy season. We need to understand that only joint efforts by city residents and the MC can bring the city out of the problem of waterlogging.

Carry out special survey of city

The Municipal Corporation is responsible for keeping the sewerage system in the city in a perfect working condition. If there is a blockage at any point, sewage overflows and becomes a cause of nuisance for all. It can even result in outbreak of any disease. The corporation spends money on the recruitment of sewermen. It should make use of the staff and depute them timely for proper upkeep of the system. The corporation must undertake a special survey of the city before the rainy season, mark spots of poor drainage and ensure that the sewerage system is in a proper running condition. Wherever needed, special attention must be paid to ensure that there is no blockage in sewer lines at any time of the year. Engineers engaged for this duty must also check that the problem does not exist anywhere. If there is any problem at any spot, it was properly attended to.

This is not for the first time that there was negligence on part of the Municipal Corporation in addressing the waterlogging issue in the city. To deal with the problem, the MC should have to take some quick actions. It should ensure proper maintenance and renovation of the drainage system so that rainwater can flow easily into drains. Moreover, residents should also not throw garbage in the drains surrounding their houses, which leads to blockage resulting in waterlogging. Roads should be re-carpeted after every five years. Most of the times, water accumulates on potholed stretches on roads.

Low-lying areas in the city witnessed waterlogging during the pre-monsoon showers that lashed the city on Thursday and there could be problems of waterlogging and overflowing sewage during the monsoon. Rainy season is about to start and we are yet to see any work on the ground. Work to clean sewers is still incomplete. Last year, the civic body swung into action after the city was already flooded. We are hoping that the authorities don’t do the same this year. All water bodies and ponds should be cleaned and de-silted before the onset of the monsoon. A majority of the rain harvesting systems, which are non-functional, should be made functional. Open manholes should be covered. The MC should identify all key waterlogging-prone areas and officials concerned should remain alert during the rainy season so that prompt action can be initiated in case of an emergency. Resident Welfare Associations (RWAs) should be involved in flood preparedness mechanisms. The civic body should provide motor pump sets to RWAs to prevent flooding in the area.

Re-carpet Roads after every 5 yrs

Waterlogging on city roads is a common problem during the monsoon. Collective efforts should be required both by the community and the civic body to overcome the trouble. For instance, residents should not throw garbage in the drains. Drainage lines should be checked regularly and potholes should be filled before the monsoon. Roads should be re-carpeted after every five years. Manholes should be covered properly. A proper rainwater drainage network should be built.

Fresh cases and deaths due to Covid are on the rise in Ludhiana once again. Despite this, huge gatherings and violation of Covid-appropriate behaviour are a common sight. Should restrictions be again imposed to check further spread of the virus?