Carrying a placard, he visits city areas to spread message 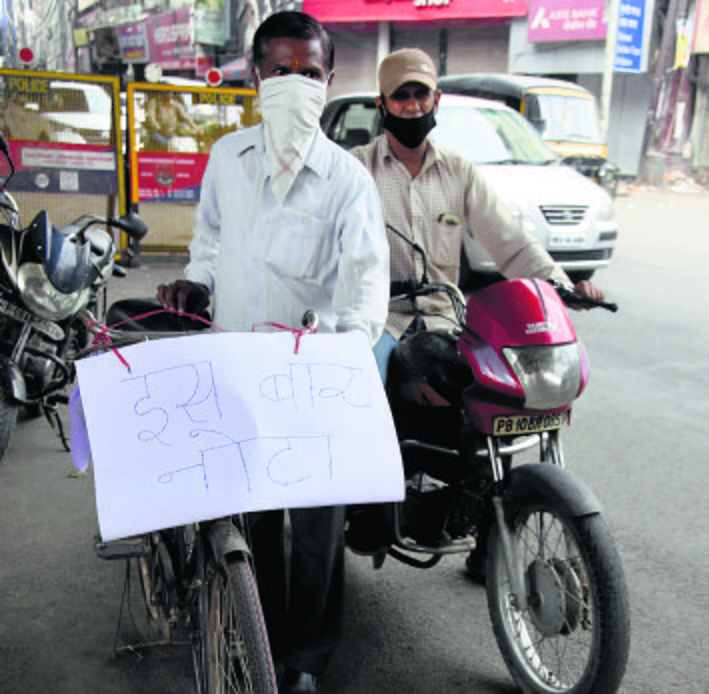 Amid the Covid-19 crisis in the country, a hosiery ‘worker’ is running a campaign, making an appeal to people to opt for NOTA (none of the above) option on EVMs in the next elections.

Amid the Covid-19 crisis in the country, a hosiery ‘worker’ is running a campaign, making an appeal to people to opt for NOTA (none of the above) option on EVMs in the next elections.

He is worried as a number of Covid-19 infected people are dying everyday in the absence of timely treatment and oxygen in various parts of the country.

Carrying a placard on his bicycle, 55-year-old Raghuveer Raju is visiting different locations in the city to appeal to people to opt for NOTA on EVM next time. The man, who has lost his job, has raised questions over the political system in the country.

He said: “Whenever any election is held, workers of all parties set up booths and ask us to vote for the candidate of their respective party. When people are dying without getting oxygen and treatment

in various parts of the country, where are those party workers? Where are our elected councillors, MLAs and MPs.”

“Poor people are suffering a lot but no government cares for them. There is a shortage of doctors, staff, and medical equipment at government hospitals,” he said.

“After the first wave of Covid-19 hit the country, the Central and state governments had enough time to make required arrangements to handle the second wave but they failed to do the same. Instead of raising their voice to improve the health infrastructure, political parties remained busy in election preparations during the second wave. Now, several people have died due to lack of oxygen. We had elected leaders but they failed us. Hence, I am forced to run a campaign in support of NOTA.”

“I have already lost my job. Many labourers are becoming jobless due to lockdown or restrictions. Even many of them don’t have the ESI insurance facility. We have the right to vote. If all people who have fed up with the system opt for the NOTA option, a lesson can be taught to all political parties,” he added.