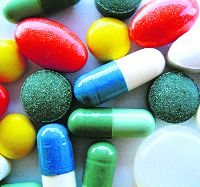 The Ludhiana rural police today claimed to have nabbed two suspects and seized 39,320 intoxicating tablets from them.

The suspects have been identified as Varinder Kumar, of Jagraon, and Gurpreet Singh of Ishar Nagar. A case under the NDPS Act was registered. Varinder also has a criminal past as in 2018, he was arrested by the Jagraon police with 2,900 intoxicating tablets.

He said CIA inspector Dalbir Singh had received a tip-off that Varinder was running a trade of drug smuggling and was on his way to deliver a huge quantity of intoxicating tablets.

Accordingly, CIA officials laid a naka at a strategic place where the suspect, who was riding a scooter (PB 25H 4402), was stopped for checking. During the search, 320 intoxicating tablets were recovered from the vehicle, the SSP said.

The suspect confessed that he had brought the consignment from the other suspect, Gurpreet Singh.

“Both suspects seem to have been running a major drug network. We will seek police remand for them for further interrogation and will bust the entire supply line of drugs,” the SSP said.