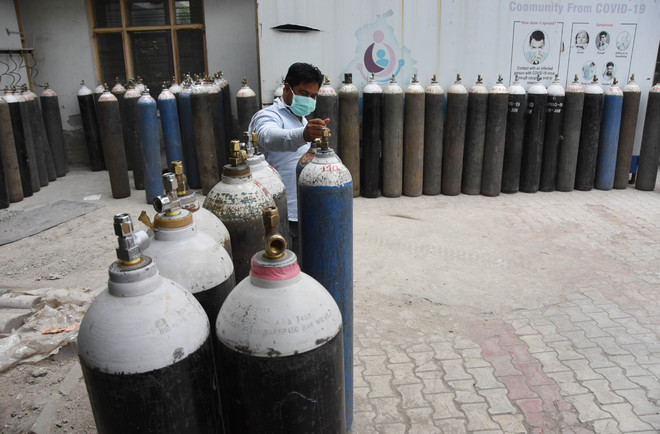 As the second Covid wave continues to rapidly slide into a devastating crisis, with hospitals falling short of beds, oxygen supplies running low and many dying of the virus daily, some of them even before seeing a doctor, the demand of the life-saving gas has touched a new high and has more than doubled as compared to the first peak in the district.

The official data compiled by the district administration, a copy of which is with The Tribune, revealed that the demand of medical oxygen in Ludhiana has touched an all-time high of 2,800 cylinders per day, which was 224 per cent more than the peak demand of 1,250 life-saving gas cylinders recorded during the first peak here.

Besides two manufacturers, six bottling plants were producing 2,500 oxygen cylinders in the district on a daily basis, leaving Ludhiana in a ‘hand-to-mouth’ situation.

“We have deputed nodal officers at all points of production, supply chain, and delivery destination to ensure complete transparency in oxygen supplies, of which we take demand from hospitals daily at 8 am and consumption data at 3 pm,” said Deputy Commissioner Varinder Kumar Sharma.

To augment the oxygen supplies, the state government had recently airlifted tankers to bring life-saving gas from Bokaro in Jharkhand.

This was done to meet the increasing demand of medical oxygen in the state after the Centre allocated 90 MT of oxygen from the steel city and total 195 MT from all other parts of the country on a daily basis.

The state was producing 32 MT of oxygen from its own sources per day and the daily demand was 250 MT, which was expected to touch 300 MT soon.

“On Chief Minister’s instructions, we first got the allocation from the Centre, then arranged tankers, tied up with the IAF, provided police escorts and coordinated with my counterparts in other states to get green corridors for the non-stop and hassle-free movement of oxygen refilled tankers from Bokaro to Punjab,” Chief Secretary Vini Mahajan said.

She said the empty tankers were airlifted from Punjab to Bokaro and refilled ones were being brought by road as the railways had refused to carry them.

Principal Secretary, Industries, Alok Shekhar, who arranged the supplies and coordinated the logistics, told The Tribune that four aircraft daily were being flown to Bokaro with two empty tankers each and since these tankers were having over 3.5-metre height, the Railways had denied to carry them on oxygen express train. He said 14 large-sized tankers had been pressed into service and the system would run on a daily basis.

Besides getting allocation of 195 MT from outside, the state has also enhanced its own production of the life gas by 14 MT daily after reviving six defunct plants and enhancing capacity of existing units.

Till date, 85 oxygen units in 22 districts were having the capacity of refilling 5,141 cylinders per day.