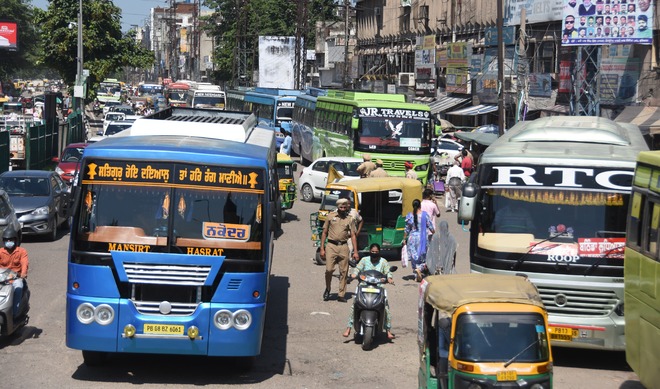 A traffic jam due to parking of buses outside the bus stand in Ludhiana. Photo: Ashwani Dhiman

Bus passengers were a harried lot as the contractual staff of Punbus, Punjab Roadways and PRTC staged a protest against the Punjab Government by closing the main bus stand in the city for two hours on Friday. Passengers were forced to wait for buses outside the bus stand.

As the buses were stationed on roads outside the Amar Shaheed Sukhdev Interstate Bus Stand here, traffic snarls also occurred.

The protesting employees demanded regularisation of their services and the inclusion of a new fleet of buses in the service. Members of the Punjab Roadways, Punbus and PRTC Contract Workers Union Punjab had earlier also gone on an indefinite strike but they had later returned to work after a meeting with the state government authorities.

Vice-president of the union Satnam Singh and others said the state government has been ignoring their demands due to which they were forced to stage the protest today. “We want that the decisions, which were taken during the meeting held on September 14, regarding 30 per cent hike in salary with 5 per cent increase every year, should be implemented at the earliest.”

The union members announced that they will support the bandh call given by the farmers for September 27. They also announced to hold gate rallies on October 6. If the demands are not met, they would go on a three-day strike from October 11 to 13 against the state government. They announced to stage a protest outside the residence of Punjab Chief Minister on October 12.