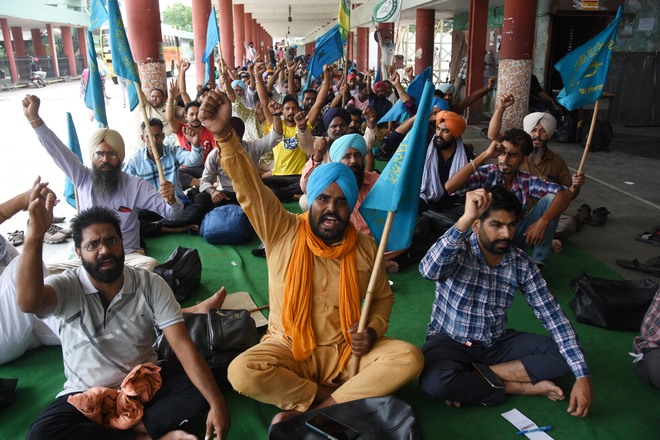 Contractual staff of the PRTC and PUNBUS stage a protest at the bus stand in Ludhiana on Tuesday. Tribune photo: Himanshu Mahajan

Passengers were a harried lot once again on Tuesday as the majority of state government-run buses did not ply on roads due to the strike of contractual employees of PRTC and PUNBUS.

Meanwhile, many passengers rushed to board private buses that were operational. However, some government buses being operated by the regular staff were also plying on the roads.

The contractual employees had gone on an indefinite strike on Monday. The contractual employees associated with the Punjab Roadways and PUNBUS Contract Workers Union Punjab staged a protest at the Amar Shaheed Sukhdev Interstate Bus Stand, Ludhiana, demanding regularisation of their services and adding a new fleet of at least 10,000 buses to the service. The union members have also demanded that private buses should not be allowed to ply on the routes designated for government buses.

Speaking at the gate of the bus stand today, state vice-president of the union Satnam Singh and union leader Jaspal Sharma said the Punjab Government has failed to fulfil the demands of contractual workers for a long time and hence they were forced to go on an indefinite strike. “Before coming into power, Chief Minister Capt Amarinder Singh used to make tall claims of eliminating the transport mafia from Punjab but he is now making efforts to eliminate government-run buses. The state government has failed to add new buses to its fleet and regularising our services. The Chief Minister had earlier claimed that the services of the contractual staff would be regularised but nothing has been done till date while the tenure of the government is going to finish soon.”

The members said a delegation of the union will meet a Principal Secretary of the Punjab Government in Chandigarh tomorrow and if their demands are not met, they will be forced to intensify the agitation.