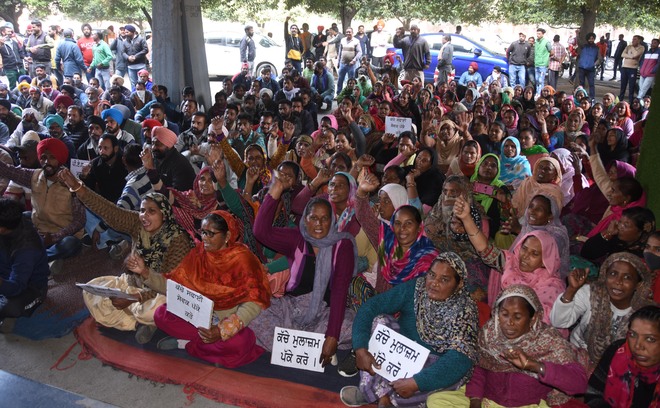 PAU employees hold a protest in support of their demands in Ludhiana on Monday. Ashwani Dhiman

Contractual employees staged a protest at Punjab Agricultural University (PAU) here on Monday, demanding regularisation of their jobs and a hike in their salaries. The protesting employees also announced to continue their agitation till their demands are fulfilled.

The protesting employees said they were working on Rs 8,451 per month salary as per DC rates while EPF and ESI instalments were deducted from this amount too. “We get low in-hand salary. Our financial background is not good. Hence, it is difficult to run our house with a low income. Contractual employees working on DC rates in neighbouring states are getting around Rs 15,000 - Rs16,000 per month but our salary is too low. Hence, we appeal to the state government to increase our salaries too,” they said.

The protesters said contractual employees such as security guards, gardeners, safai karamcharis, beldar and other workers should be regularised as per their seniority at the earliest. They have also demanded that their salaries should be increased so that they could meet their daily needs.

Chamkaur Singh, president of the association, said they had given a memorandum to Chief Minister Charanjit Singh Channi about their demands over a month ago. “We want from the government to meet our two main demands. Jobs of the contractual employees, who have been working for a long period, should be regularised on a seniority basis. Another demand is that the monthly salary of other employees should be increased to at least Rs 15,000 - Rs 16,000.”