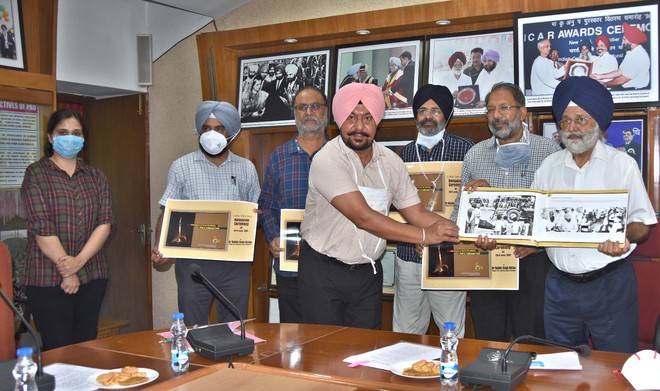 The book was conceptualised by the VC with special contribution by Dr Navtej Singh Bains, Director of Research and Dr Tejinder Singh Riar, Additional Director of Communication, PAU. The book has been edited by Sheetal Chawla, Assistant Director, Publications.

While releasing the book, Dr Dhillon said the coffee table book was a pictorial history of Green Revolution that grew with the introduction of land reforms; use of short-statured, high-yielding varieties of wheat and rice; provision of irrigation by canals and tube wells; use of chemical fertilisers; construction of rural link roads; provision of rural electrification; expansion of mechanisation; impeccable administration of the government and unsurpassed scientific expertise.

He further said that the book adumbrated the hardships faced by the people during the post-independence era, diligence and hard work of Punjabi farmers that made the nation food secure and intellectual prowess of agricultural scientists of PAU (development of varieties – Kalyan Sona 227, PV 18 and PR 106 as well as technologies) that ushered in Green Revolution. Dr Dhillon congratulated the diligent team of the Communication Centre for bringing out the book under the stewardship of Dr Riar.

Dr Jaskarn Singh Mahal, Director of Extension Education, said the development of improved technologies by PAU and their dissemination to the farmers in association with line departments proved to be a boon for the growth of agriculture in Punjab.

Dr Navtej Singh Bains, Director of Research, said: “A significant aspect of the Green Revolution, however, is not just its early impact that shut the door on famine, but the continued and progressively larger contribution to the national food security system for about a hundred crop seasons now.”

Dr Riar said the book was dedicated to the 550th birth anniversary of Guru Nanak Dev, who gave the message to the mankind – ‘Kirat Karo, Naam Japo, Vand Chako’. The book has been designed by Swarnjit Savi and photographs have been contributed by Mr Manjit Singh, Senior Photographer, PAU.