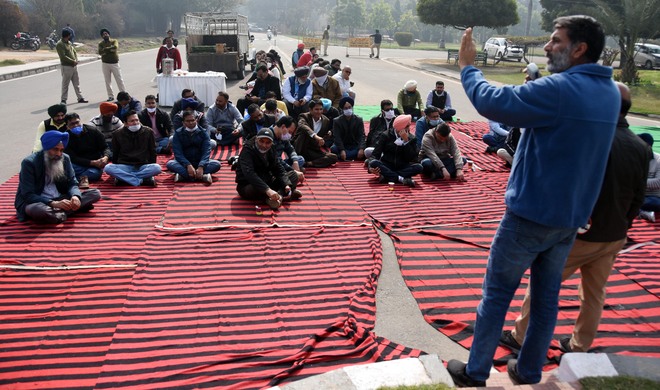 Members of the PAUTA during a protest. Ashwani Dhiman

Teachers from both the universities participated in the protest to sensitise them about the present status of pay scales.

The UGC recommended pay scales have always been adopted by the state government in toto in the past. Punjab is lagging behind in the adoption of 7th central pay scales as well as the 7th UGC pay scales and is probably the only state in the country which has not implemented these scales. The teachers have been deprived of these scales since January 2016. The state government has issued an order on December 28, 2020 for fixing basic pay for new recruitment of teachers in colleges and universities of Punjab which decreases the basic pay to be given to teachers as compared to the 7th UGC pay scales. The delinking of scales from 7th UGC scales will result in delinking of the higher education system of the state from the national higher education system, said Dr Harmeet Singh Kingra, president, PAUTA.

He further added that the university administration is also deviating from the earlier notified career advancement scheme for the promotion of the teachers of the university.

These two actions taken in conjunction will affect the working environment of the teachers affecting their productivity. PAUTA will intensify this agitation against the state government and the university administration in coming days. It plans to hold a campus rally in the PAU on February 24 where teachers from other colleges and universities will also participate.