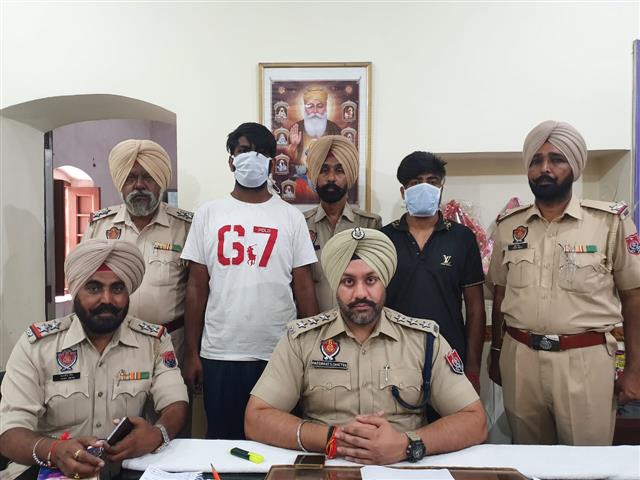 The accused in police custody in Ludhiana on Friday. Tribune Photo

The Payal police claimed to have solved the blind murder case of a man, Jagdev Singh, alias Kala, who was found murdered at Dhamot Kalan here on August 18.

Had attacked victim in fields

Revealing the cause of murder, Payal DSP Harsimrat Singh Chetra said the two accused were taking drugs in the fields of Jagdev, the victim. On seeing the two, he asked them to leave. Infuriated, the suspects allegedly hit the victim in the head with a stick. Jagdev succumbed to his injuries later.

The DSP, Payal, Harsimrat Singh Chetra, while addressing a press conference on Friday said deceased’s brother Dalwinder Singh on August 16 had complained to the police that his brother had gone to the fields to collect fodder but he didn’t return. The deceased’s brother recovered blood-stained sleepers and mobile phone of his brother from the fields. He suspects that his brother might be kidnapped and then murdered by some unidentified persons and accordingly, the police had registered a case in the matter.

Chetra said on August 18, the body of Jagdev was found and the police started a probe to trace the culprits. Later, the police identified the two accused and they were arrested today. After commiting the crime,the duo threw the body into the Sirhind canal and fled the spot.