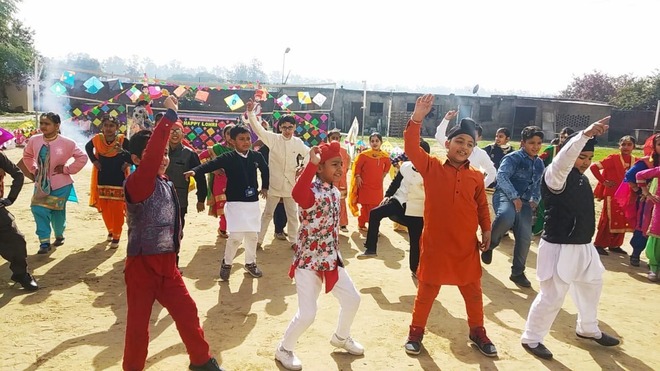 Students of Peace Public School in a jubilant mood during Lohri celebrations in Ludhiana on Saturday. Tribune photo

Students had a wonderful time flying kites. Tiny tots were dressed in traditional costumes and performed giddha and bhangra. There were various art-and-craft competitions held to capture the spirit of Lohri. Students and staff savoured Lohri delicacies such as peanuts, gachak and rewari. The celebrations ended on a great note with children dancing to the tunes of bhangra around a bonfire.

Ludhiana: A Lohri mela was organised at Green Land Sr Sec Public School, Jalandhar Bypass. Students of Class VI to XII came dressed in traditional Punjabi attire and performed bhangra and giddha on the beats of the dhol around bonfire. Offerings of 'chirwa', 'meva', 'til', 'gur', 'rewri' and 'gachak' were made to the God of fire. Popular songs in praise of 'Dulha Bhatti' were sung by students. The faculty and students enjoyed eatables and game stalls at the mela.

Lohri was celebrated with great pomp and show. Tiny tots were dressed as 'gabrus' and 'mutiyaars'. While offering bonfire prayers, vice-principal Gagandeep Kaur and senior coordinator Paramjit Kaur Sekhon wished the staff members and students best for the festivities. A cultural programme was also organised, in which students of all classes recited poems on Lohri and Maghi, sang folk songs and staged a skit.

Lohri was celebrated with great exuberance and fanfare. All students and teachers took part in the celebrations. The programme started with a 'Lohri poojan'. Principal Amarjit Dhaliwal, along with other teachers, worshiped Dhooni and offered their prayers for the prosperity of the nation. On this occasion, tiny tots presented a Punjabi folk dance, and sang Lohri songs and poems.

Lohri was celebrated with lots of enthusiasm by students of pre-primary to Class V. Students, dressed in their best traditional attire, presented a small cultural bonanza in the presence of Principal Manju Kansal. A bonfire was lit and peanuts, 'gachak' and 'rewris' were distributed to students.

The celebrations began with a special assembly, in which the importance of the festival was highlighted. Students of kindergarten attired in traditional dresses performed bhangra on Punjabi beats, sang songs and enjoyed peanuts, 'rewari' and 'gachak'.

The school organised a 'corn-kids craft' activity for the students of LKG and UKG with the purpose of introducing them to their rich culture and heritage. Teachers acquainted students with the importance of Lohri. The spirit of the tiny tots was high when they tapped their feet by performing giddha and bhangra on the beats of Punjabi folk songs and sang traditional Lohri songs. Principal Anu Verma wished everyone happiness and prosperity.

A special cultural programme was organised in which various items such as singing of folk songs, recitation of poems and skits on Lohri were performed. A bonfire was lit and groundnuts, 'chirva', 'rewari', 'gachak' and sweets were distributed among students.

The function started with speeches in Punjabi highlighting the importance of the festival. The tiny tots of kindergarten enjoyed a campus party, in which they danced to the tune of popular Punjabi songs. An inter-house singing competition was also held for students of Class VI to VIII. The school auditorium was decorated with hand-made kites, buntings and charts. TNS