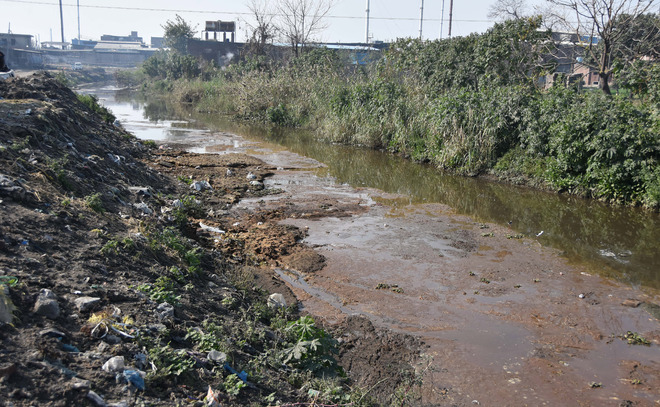 A huge amount of untreated waste from dairy complexes on Tajpur Road and Hambran Road is still being dumped in the Buddha Nullah. Tribune photo

Even months after the inauguration of the Rejuvenation of Buddha Nullah project, a plan to shift the diaries outside the MC’s jurisdiction is hanging fire. These dairies, located along the Buddha Nullah, have been polluting the drain for decades.

A huge amount of untreated waste from dairy complexes on Tajpur Road and Hambran Road is still being dumped in the Buddha Nullah. Many of the dairy owners have installed pipes to dump the dairy waste directly in the drain. It is not clear when the issues related to these dairies would be resolved.

The untreated sewage, untreated waste from dyeing units and electroplating units, untreated dairy waste and solid waste are the major sources of pollution in the Buddha Nullah, which further pollutes the Sutlej.

He said, “The government should allow the change of land use (CLU) at existing dairy complexes land as per the demand of the dairy owners. The authorities concerned should find out a piece of land outside the MC’s limit for shifting the dairies. The issue of dairies should be resolved at the earliest to make the Rejuvenation of Buddha Nullah project successful.”

In 2020, a high-powered committee was formed to take a decision on the dairy complexes. The panel had then made a proposal to shift the dairies to Gorsian Kadar Baksh village. However, the village panchayat and villagers had refused to give the village land for setting up dairies.

A few other plans were earlier also made to sort out the issue in the past. A plan was also made to set up an effluent treatment plant at Tajpur Road dairy complex but the plant was not set up.

In September 2020, MLA from Ludhiana East Sanjay Talwar had raised a demand that the committee should make it clear within 15 days whether these dairies would be shifted outside the MC’s jurisdiction or not.

DS Oberoi of Tajpur Road Dairy Complex said, “If the government sets up a biogas plant at the existing dairy complex on Tajpur Road, it would also be better for us. If dairies are to be shifted, we want that the government should find out land within the radius of 10 km from the city limit so that the dairy owners don’t face inconvenience. The dairies should not be shifted to Gorsian Kadar Baksh village that is located around 33 km away from the city and we have also rejected this proposal.”

“In 2012, a plan was also made to shift the dairies outside the Municipal Corporation’s jurisdiction. We had then requested the authorities concerned to shift the dairies to Dhanansu village but to no avail. The dairies should be shifted to a place that is located near the city,” he added.

There are thousands of head of cattle at these dairy complexes. Mayor Balkar Singh Sandhu said they would discuss the matter regarding shifting of dairies in the upcoming meeting.