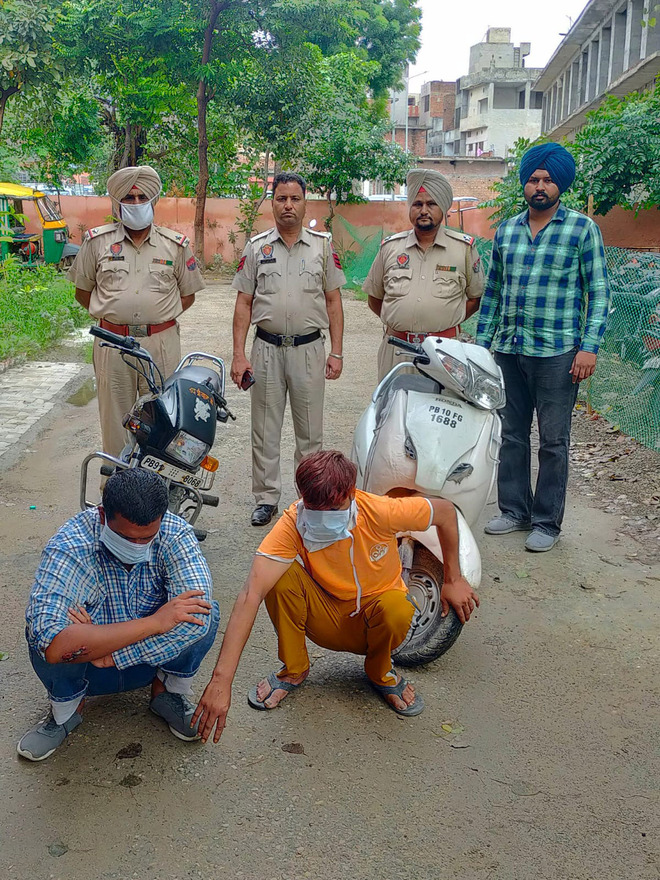 The suspects in custody of the Kotwali police on Sunday.

The Kotwali police claimed to have busted a gang of vehicle thieves and recovered two stolen vehicles from them.

The suspects have been identified as Deepak Kumar, alias Deepu, of Janta Nagar and Raju Kumar of Peeru Banda.

The Kotwali SHO, SI Harjit Singh, said both accused were running a gang of thieves and they were on the way to the Clock Tower on a stolen Activa scooter.

A police party set up a naka and caught the scooter-borne suspects. They had put up a fake number plate on the scooter.

Both suspects confessed that they had recently stolen a motorcycle from Transport Nagar. The police recovered the two-wheeler.

The SHO said in July, 2019, the suspects, along with members of the gang Taran Dhami and Sukhdev Singh (died recently), had took away an Activa scooter of person by force near Kaind bridge. They later found Rs3.12 lakh lying in the dicky which they distributed among themselves.

Deepak is facing three criminal cases, including the one for attempt to murder. Raju, too, is named in two cases.

The SHO said they would seek police remand of the suspects to recover more stolen vehicles from them and to arrest the other members of their gang.