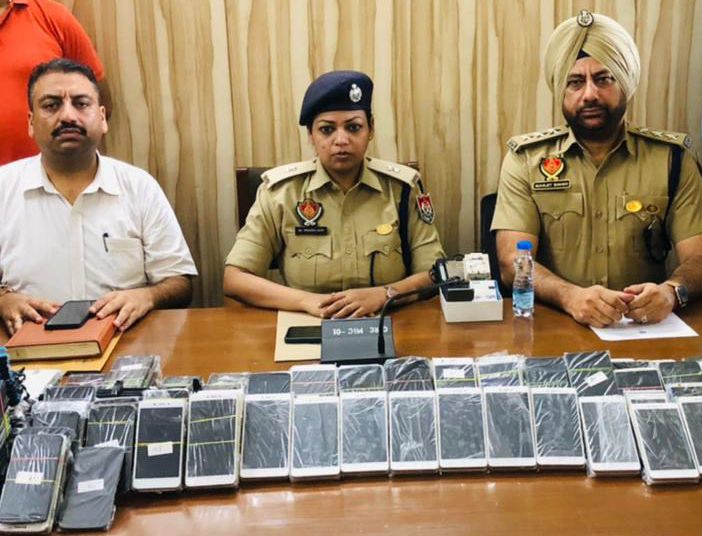 The four arrested accused have been identified as Vijay Singh, a resident of Sonipat, Haryana, Ajay Kumar, Chandan Arora and Dheeraj, all residents of Ludhiana. The police recovered 310 tampered mobile phones, 485 mobile batteries, 16.5 kg e-waste (scrap) of mobile phones, a computer, NAND programmer software and a mobile repairing machine. A case was registered against them.

SP (Investigation) Pragya Jain conducted a press meet in this regard today.

“On the directions of SSP Ravi Kumar, the Khanna police busted the gang. Initially, an accused was nabbed from a naka with a few mobile phones but further interrogation led to the recovery of 310 mobile phones,” said SP Pragya.

SP Pragya said a tip-off was received that Kanwaljit Singh of Model Town, Sonipat, Haryana, had been selling stolen mobiles by changing their IMEI number and today he sent a person, Vijay, to deliver the mobiles to their clients in Ludhiana. Accordingly, the CIA team set up a naka on the Amloh road from where the accused were apprehended.

The SP said the arrest of Kanwaljit might lead to the identification of other members of the gang living in various states of the country. Owners of these mobiles were being traced to handover mobiles to them, she added.

Miscreants buy old mobiles from different companies along with the printed circuit board assembly in auctions. They then used to replace the PCBA of stolen mobiles with the old ones bought in auctions and they also used to change the IMEI number with some programming software. Later, they used to sell the same to their customers at cheap prices. The SP said such tampered phones could not be traced by law enforcement agencies if used by criminals. The police will also check if the accused had been selling such mobiles to criminals or not.