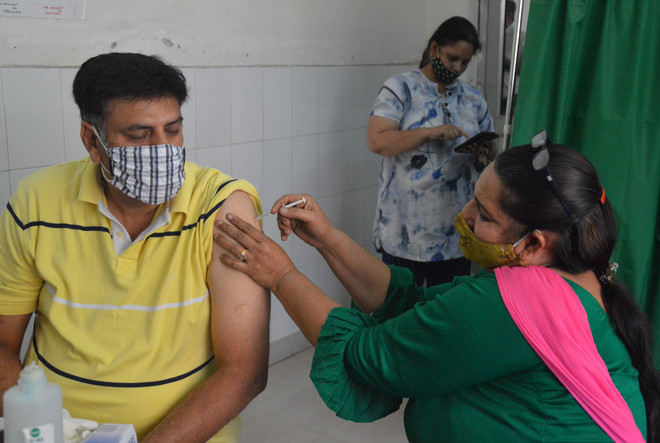 A man gets vaccinated against Covid in Ludhiana. Inderjeet verma

Refusing to take a break, the average daily Covid cases continue to register exponential rise by crossing 1,100-mark, while the average positivity rate also touched a new high of 12 per cent in the last week.

The augmentation will help ease out the current situation as 633 beds — 517 L2 and 116 L3 — are still vacant in the district. However, all 116 L3 vacant beds are available in private hospitals as all 16 L3 beds in the lone Civil Hospital remained occupied till this evening.—  Varinder Kumar Sharma, Deputy Commissioner

The key indicators of virus surge, the count of average daily Covid cases mounted to 1,139 at 12 per cent positivity rate, even surpassing the state’s 11.7 per cent, between April 25 and May 1.

With the increasing caseload, Ludhiana continued to remain way ahead from all other districts and re-emerged as the Covid capital of the state.

The nearest rival was Mohali, which reported 860 average daily cases between April 25 and May 1, which was 24.49 per cent more than Ludhiana.

Giving a big respite to the critical Covid patients seeking hospitalisation with oxygen and ventilator support, the district administration has added 515 more beds — 391 Level-2 and 124 Level-3 category — in the last two days.

Sharing details, Deputy Commissioner Varinder Kumar Sharma told The Tribune that the augmentation helped ease out the current situation as 633 beds — 517 L2 and 116 L3 — were still vacant in the district. However, all 116 L3 vacant beds were available in private hospitals as all 16 L3 beds in the lone Civil Hospital remained occupied till this evening.

Of the 517 L2 vacant beds, 320 were available in private facilities while the four government hospitals in the district had 197 available till 5 pm.

With no vaccine available, Ludhiana on Monday stopped the ongoing vaccination drive for 45-plus age groups. “We have exhausted the entire Covishield stock, while a few hundred doses of Covaxin are still available,” confirmed the District Immunisation Officer Dr Puneet Juneja.

Today, a total of 916 persons were inoculated — 542 second dose and 374 first dose — following which all sites were shut till further order. “Tomorrow we will run only four session sites for immunising Covaxin beneficiaries with a second dose,” informed the DIO. He added that fresh vaccine stock was expected on Tuesday, and if it happened, the inoculation could restart from Wednesday onwards.