No improvement in condition despite crores spent on repair 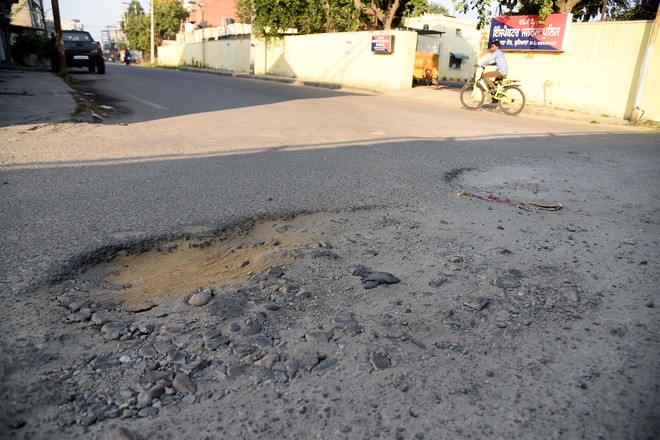 A majority of the roads and streets, including some newly-constructed ones, lie in a poor state due to negligence on part of MC officials. Photo: Ashwani Dhiman

The recent series of ‘Road rot’ carried by Ludhiana Tribune to highlight on pathetic conditions of roads, including main, feeder roads, streets, state and national highways located within city limits, was a shocking revelation, if anything, which went on to show that despite spending heavily on the construction of new roads/streets and repair of the existing ones, the Municipal Corporation (MC) had failed to provide reasonably good roads to the city residents.

Most of the roads covered in the series – be these in residential areas, posh localities, commercial hubs or periphery of the city, including some of the newly carpeted/constructed roads, were full of pot holes, at many places, the seal coat (uppermost surface) had peeled off and gravel was coming loose and situation was further compounded during the rainy season when most of the roads went under water due to poor drainage system.

If officials of B&R (buildings and roads) branch of the MC are to believed, roughly Rs 125 crore are spent every year for the construction and maintenance of roads but going by the overall condition of the roads and streets – one of the crucial components of urban infrastructure, the expenditure seemed highly unjustified or rather wasteful.

“Reasons are not hard to find for such poor quality of roads even in posh areas such as Civil Lines, Dugri, Sarabha Nagar, BRS Nagar, Model Town or for that matter even stretches of state and national highways (Chandigarh Road, GT Road and Ferozepur Road) within the city limits,” says a retired chief engineer (B& R) requesting anonymity.

Without mincing words, the retired official attributed the rot to blatant compromise with quality, slack supervision and corruption.

“Seven samples of PMC roads and streets and almost as many of RMC roads and streets had recently failed the quality tests and the errant officials have gone scot free. This explains the sorry state of affairs prevailing in the civic body. In such a scenario, having reasonably good urban infrastructure in the city would remain a pipe dream,” he said.