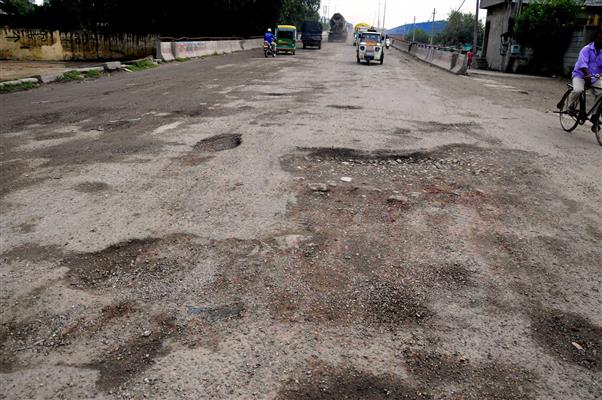 Though many potholes on the Dhandari flyover are posing threat to commuters, the Municipal Corporation is yet to wake up from its slumber. The potholes are being ignored for a long time.

The flying plumes of dust due to the broken road portions have increased woes of commuters. Residents and industrialists have demanded that the civic body must ensure early repair of both sides — Focal Point to the NH-44 and the NH-44 to Focal Point — of the flyover at the earliest.

Rajat Sood, a factory owner, said: “The Dhandari flyover road is in a bad shape for the past several years. Potholes on the flyover are posing threat to commuters. Moreover, when heavy trucks pass through the potholed portions, the chances of damage to slabs or pillars of the flyover can’t be ignored. Whenever the matter regarding the potholes was raised, either it was ignored or patches were not properly laid. When the public pays huge taxes to the government, it is the responsibility of the latter to provide better road infrastructure, ensuring safety of the commuters.”

“During the regime of the previous government, it was decided that both sides of the flyover would be recarpeted but these have not been recarpeted to date, leaving the daily commuters. The state government should direct the civic body to ensure recarpeting work on the flyover,” he added.

Sukhwinder Singh, a resident of Dhandari Khurd, said many people from their area use the flyover in routine but its poor condition had been ignored. “We demand from the government to instruct the department concerned to get the flyover recarpeted without any further delay,” he said.

The residents also demanded that speed limit boards and signboards must be displayed on the flyover. They said many of the street lights on the flyover often remain non-functional. The civic body must pay attention to ensure the safety of the commuters.

Residents have demanded that speed limit boards and signboards must be displayed on the Dhandari flyover. Many street lights on the flyover often remain non-functional. MC must pay attention to ensure commuters’ safety.