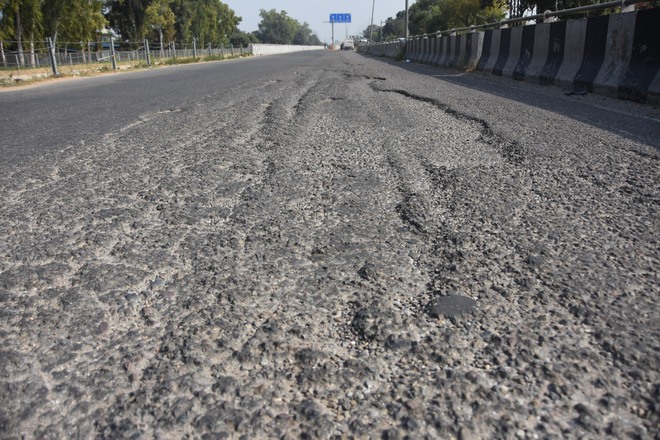 Potholes on the southern bypass near BRS Nagar in Ludhiana on Wednesday. Photo: Ashwani Dhiman

Though the problem of potholed stretches is not new in the city, the authorities concerned have failed to learn a lesson from road accidents in the past. No timely repair of broken roads is undertaken to prevent mishaps.

Thousands of commuters are a harried lot due to big potholes on the southern bypass (along canal) near BRS Nagar, Jawaddi and few other locations. This potholed stretch, which falls under the PWD, is an open invitation to mishaps. Besides, few damaged street light poles on the stretch increase chances of mishaps.

Commuters have demanded that the authorities concerned should pay attention to their safety and carry out repairs on the stretch at the earliest.

Gagandeep Singh Walia of Dugri said, “Potholes have appeared on the approach road to railway over bridge near BRS Nagar. As it is one of major roads in the city, the department concerned should ensure its repair at the earliest.”

It is learnt that the PWD has to float tenders to allot work for laying patches on potholed road and this process may take some more time. A senior citizen, Satish Thaman said, “Potholes on this road have been ignored for a long time. The government should start a special drive to carry out patchwork within 24 hours whenever any pothole appears on any road.”

“The government should fix responsibility of departments concerned to ensure safety of commuters. Moreover, there should be enough stock of material so that patchwork is not be delayed. Even if material is not in the stock, the authorities must arrange it from other government departments to carry out timely road repairs,” he added.

The PWD Executive Engineer, Davinderpal Singh, said, “We have got approval from the government to carry out road repairs. Tenders for this work will be floated soon. It may take around 20 to 25 days to start the work to fill potholes.”