Power staff up in arms over demands in Ludhiana 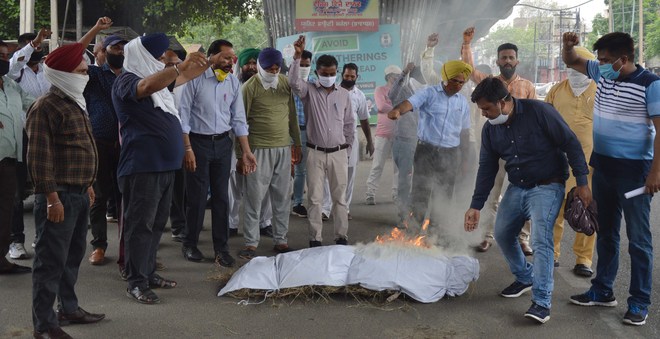 PSPCL employees burn an effigy during a protest in Ludhiana on Thursday. Photo: Inderjeet Verma

Employees of the P and M Circle and the City Division of Punjab State Power Corporation Limited held a protest and burnt an effigy of the management here today on the call given by the ‘Bijli Mulazam Ekta Manch, Punjab’, to hold protests at the division and sub-division level after ongoing negotiations with regard to pending demands failed on June 18.

Addressing the protesting employees, state deputy secretary Rachpal Singh, zonal convener Ashok Kumar and Himmat Singh Sarinh served an ultimatum on the PSPCL management to implement the agreement arrived at on December 20, 2019, in letter and in spirit, failing which employees would be left with no other choice but to intensify the agitation.

The trade union leaders said depending on the response from the management, the employees would resort to ‘work to rule’ from June 26 across the state. If the management continued with its adamant attitude and accepted demands were not implemented, a state-level dharna would be staged at the PSPCL headquarters in Patiala on July 14, 2020, and thereafter, the protesters would stage a march to Moti Mahal, the residence of Chief Minister Capt Amarinder Singh, for a demonstration.