Private agencies, FCI stay away as paddy arrival comes to end in dist : The Tribune India 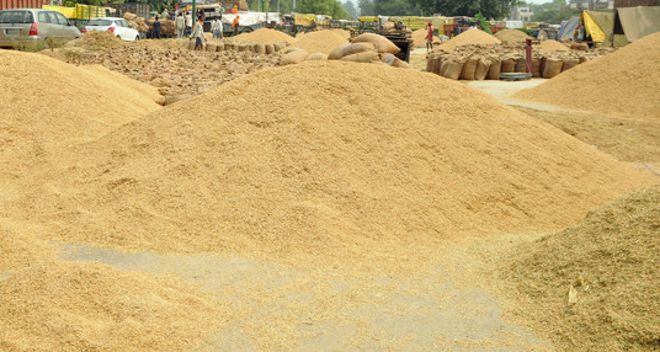 Private agencies and Centre’s Food Corporation of India (FCI) have almost stayed away from the procurement front as paddy arrival comes to an end in the current kharif season in the district.

With private agencies and the FCI buying only 334 and 488 tonnes of paddy, respectively, which accounts for just 0.05 per cent of the total arrival, government agencies have procured almost 100 per cent of the rice that had arrived across 13 grain markets in the district, official figures have revealed.

With no more arrivals and the arrived stocks already procured and lifted, mandis in the district presented a deserted look during a visit on Saturday.

We have ensured the complete purchase of paddy that had arrived at grain markets this season. Payments for the procured stocks have been made to farmers within the stipulated time period and we have also ensured swift lifting of the purchased rice. Peasants were provided with all basic amenities during their visit and stay at the mandis. —SURABHI MALIK, DC 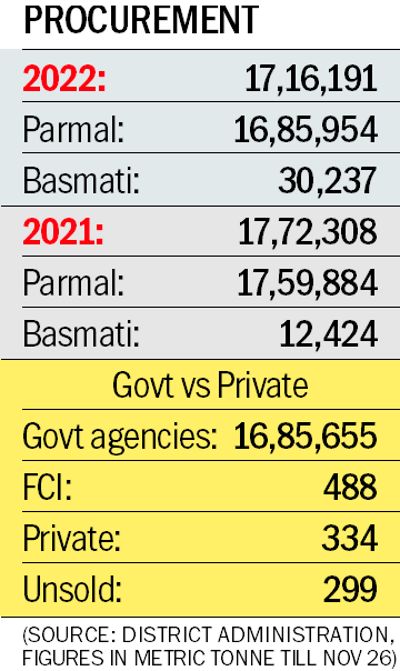 Additional Deputy Commissioner (General) Rahul Chaba told The Tribune here on Saturday that as many as 16,85,954 metric tonnes (MT) of parmal rice had arrived in the district till date, of which 16,85,655 MT had been purchased, accounting for 99.98 per cent of the total arrival, and only 299 MT of paddy remained unsold at the following mandis — Sahnewal (101 MT), Mullanpur Dakha (2 MT), Machhiwara (180 MT), Ludhiana (13 MT) and Jagraon (1 MT).

In terms of mandi-wise procurement, Jagraon led the district with the maximum of 2,51,289 MT of parmal rice procured, whereas Asia’s largest grain market at Khanna stood third with 1,92,994 MT of paddy purchase till Saturday. Mullanpur Dakha remained second with a procurement of 2,25,344 MT of parmal rice so far.

Khanna led the district with the maximum of 19,068 MT of purchase of basmati, followed by Machhiwara at 8,606 MT, Jagraon at 2,453 MT, and Mullanpur Dakha at 110 MT. No basmati arrival was recorded in the remaining nine grain markets of Ludhiana.

With 30,237 MT of basmati rice already procured this season so far, the previous year’s total purchase was 12,424 MT, which is almost 59 per cent less. While Rs 4,375 per quintal was the maximum price that basmati had fetched so far, the minimum price at which it was sold in the district this season remained Rs 3,190 per quintal.