Flout 50% capacity norm, ply vehicles to other states without permit 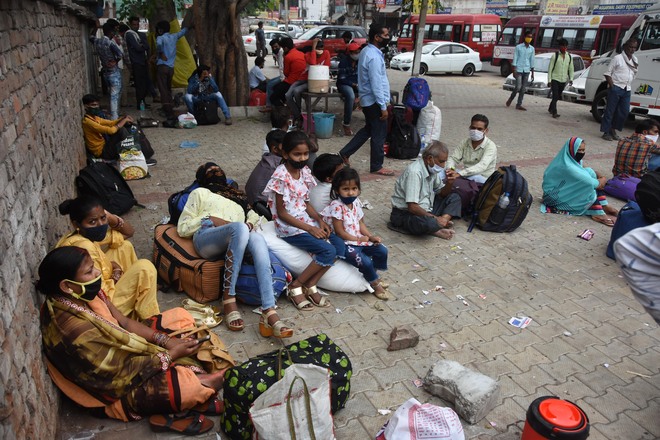 Amid surge in Covid-19 cases and restrictions, migrants in a large number are waiting for buses to go to their native places from Ludhiana. Photo: Ashwani Dhiman

Amid surge in Covid-19 cases and restrictions imposed by the government, many of the migrants are going back to their home states like Uttar Pradesh and Bihar.

Taking advantage of the situation, the private bus operators are not only charging hefty bus fares from these people but also carrying the passengers more than the permitted limit by ignoring social distancing norms. Several private buses are plying from Ludhiana to other states allegedly by breaking law.

The Punjab government has directed the Transport Department that a number of passengers in buses be restricted to 50 per cent of the capacity. But, some of these private bus operators are allowing passengers even more than the total capacity.

A number of migrants were seen at the Ludhiana Bus Stand on Wednesday, waiting to take buses to their respective states. A migrant, Rakesh Kumar, said, “I used to work as a waiter at marriage palaces. Now, I have no work. The restrictions have been imposed. I have no other source of income at present due to which it is difficult for me to stay here. I can’t even afford room rent without any job. I have to pay high fares to go back to my village in UP in a private bus.”

The Bihar government has already announced lockdown in the state. But, a number of people with their families were seen waiting outside the bus stand in Ludhiana to catch buses to Bihar.

Rajwinder of the Textile Hosiery Kaamgar Union said, “After new restrictions have been imposed, more migrants are going back to their home states, including UP and Bihar. The private bus operators are charging high fares from the passengers. It is the responsibility of the government to handle the situation and take action against those exploiting the migrants.”

Earlier, Jaswinder Singh Grewal, general secretary of the Small Scale District Bus Operators Association, Punjab, had also sent a complaint to the Union ministry concerned against plying of private buses from Ludhiana to Delhi, Uttaranchal, UP and Bihar allegedly without permit and against the norms.

An employee of the government bus service said, “Several private buses are illegally plying from Ludhiana to other states. These buses are not allowed to ply to other states but violations are being done by some private operators under the nose of the authorities concerned.”

Despite repeated attempts, Secretary, Regional Transport Authority (RTA), Ludhiana, Sandeep Singh Garha could not be contacted for a comments.