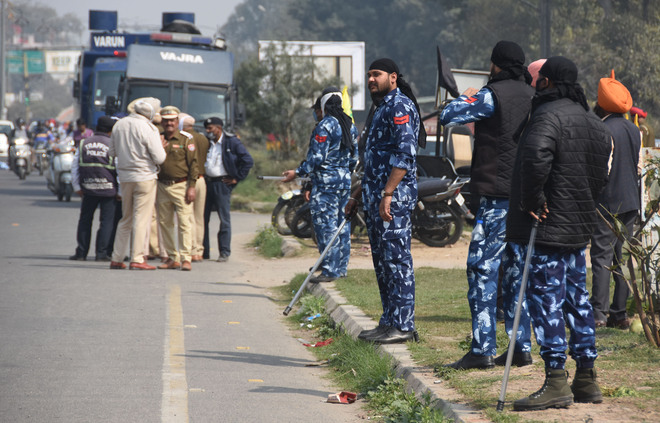 Police deployed during the protest by different organisations demanding the release of arrested farmers and activists in Ludhiana. Tribune photo: Himanshu Mahajan

The kin of 27-year-old Iqbal Singh, who was arrested from Singhu border, also participated in the protest.

Tejinder Singh, a 51-year-old man from Tussa village in the district, said, “My son Iqbal Singh was arrested from Singhu Border on January 29. We learned about his arrest on morning of January 30. He had been performing langar service at Singhu Border but he was arrested by the police in false case. My son is innocent and should be released immediately.”

Meanwhile, police force was deployed at the protest site.

Taranjit Singh Nimana, of Bhai Ghanaiya Mission Sewa Society, who was leading the protest, said, “We have demanded that the FIRs registered against all innocent farmers, activists, writers, journalists and others should be quashed. All these innocent persons should be immediately released from jail.”

Pardeep Singh Ayali of Sikh Youth Power of Punjab, who along with a convoy carried out a vehicle rally from Mullanpur to Ludhiana, participated in the protest outside Gulmor Hotel here today, said, “We demand quashing of false cases and immediate release of all those, who were arrested during the ongoing stir against farm laws.”