Traffic jam outside due to stationing of private buses on road 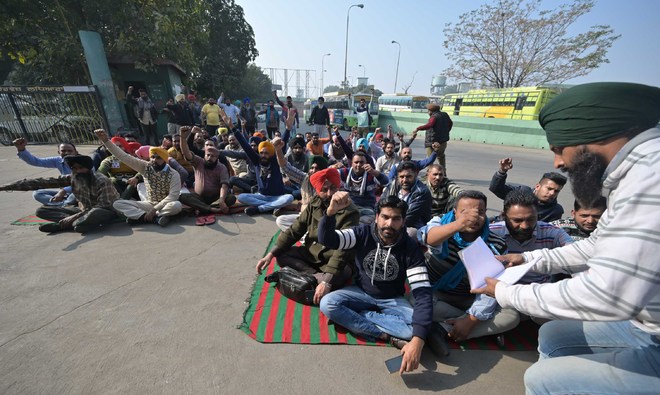 Passengers were a harried lot as the contractual employees of government-run bus services closed the bus stand for around two hours to mark their protest against the state government. The protesters accused the government of not regularising their services despite giving assurances for the past three months.

Many private buses were stationed on the road as bus stand gates were closed by the protesting employees. Thus, the traffic jam occurred on the stretch outside the bus stand. The passengers were seen waiting for the resumption of bus service inside the bus stand too.

Punjab Roadways, PUNBUS and PRTC Contract Workers Union leader Satnam Singh said they staged a protest as their demands have not been met by the government. He said the services of contractual employees are not being regularised by the government.

“When Capt Amarinder Singh was the Chief Minister, he had assured us that our services will be regularised. After that Transport Minister Raja Warring and Chief Minister Charanjit Singh Channi gave similar assurances but nothing has been done to regularise our services to date”, the protesting employees said.

The union members have also demanded that along with the regularisation of their services, 10,000 new buses should be purchased for strengthening the government bus services. They said the number of Roadways buses have reduced to 399 from 2,407, while the Punjab Chief Minister and Transport Minister are making claims of providing free bus facility. Instead of resolving the issues of contractual employees by holding meetings, the government is threatening them, they added.

The protesting employees said if their demands are not met by December 6, they will go on an indefinite strike from December 7 onwards.