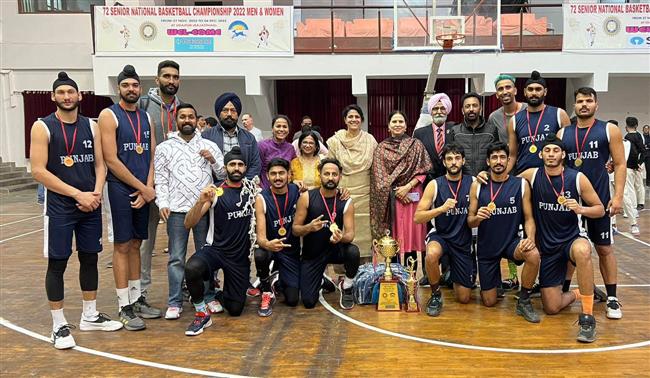 Punjab players with coaches and officials after winning the championship in Udaipur on Sunday. Tribune photo

Punjab dethroned defending champions Tamil Nadu to lift the winners’ trophy in the men’s section in the 72nd Senior National Basketball Championship, held between November 27 and December 4 at Udaipur in Rajasthan.

The Punjab team avenged the defeat it had suffered against Tamil Nadu in the 71st edition of the championship at Chennai, in which the team had lost 69-87 in the finals and had to be contented with the runners-up trophy. In the finals played at Udaipur, Punjab outwitted arch rivals Tamil Nadu 94-80 to regain the title.

Gurbaz Singh Sandhu, a trainee of Ludhiana Basketball Academy (LBA), played a pivotal role in Punjab team’s victory. For his outstanding performance, Gurbaz was adjudged the best player of the championship.

Honorary general secretary of PBA, Teja Singh Dhaliwal, said the association would soon hold a function to felicitate the boys for bringing laurels to the state.