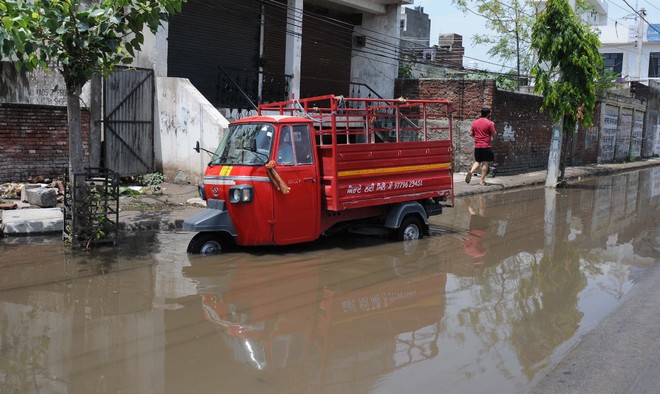 A waterlogged street in Ludhiana on Sunday after the night showers. Photos: Ashwani Dhiman

The city witnessed its first spell of monsoon last night when heavy to moderate rain continued for over an hour inundating several localities. While the showers provided some relief to people from sultry weather, in some areas, residents had to suffer inconvenience due to power failure caused by line faults or other snags.

Eagerly awaited rain provided a huge relief to the people who had been reeling under the scorching hot and humid weather conditions for the past about one month, but high-velocity winds that preceded the rain uprooted many trees, brought down many sign boards and caused line faults and other electrical defects which led to disruption in power supply in many localities which lasted for more than two hours in some areas.

Several localities, including Humbran Road, Kitchlu Nagar, Haibowal, Old GT Road, Domoria Pul, Dholewal Chowk, Dugri, Model Town and many areas in the old city had remained under water till afternoon today. In the waterlogged areas, pedestrians and drivers had to negotiate roads in knee-deep water.

In the rain-affected areas, residents complained that waterlogging was a persistent problem caused due to the clogged sewer lines and the absence of storm water sewers. “The sewer lines are far too inadequate to take even normal inflow of sewage and the condition worsens when it rains because the entire rainwater flows into sewer lines and it takes many hours for the lines to discharge the heavy inflow,” said residents of Jassian Road in Haibowal.

In many other localities, residents complained that despite repeated complaints, the sewer lines had not been cleaned up by the Municipal Corporation as a preparation for the rainy season. Due to negligence on the part of the MC staff, the roads and streets were inundated and at times, rainwater entered houses and shops causing immense damage, the residents added.