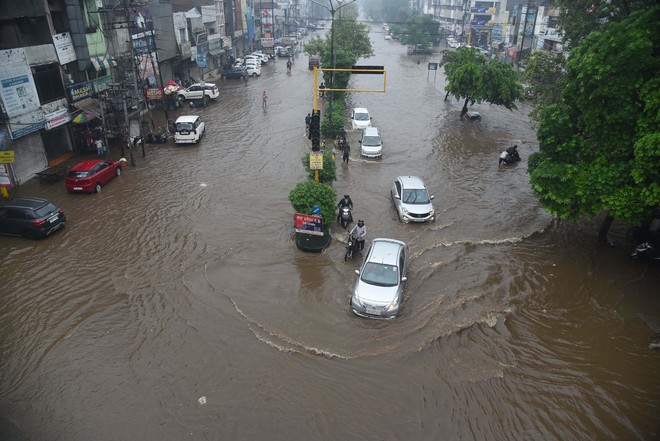 A waterlogged road near the Vishwakarma chowk. Photo: Himanshu Mahajan

The incessant rain once again exposed the tall claims made by the political leaders and Municipal Corporation of making Ludhiana a smart city as major waterlogging was witnessed in various parts of the city on Thursday. Commuters struggled while passing through badly flooded main and internal roads of the city.

Several vehicles, including cars and two-wheelers, were stuck after developing snags in the knee-deep water on the roads. Also, some two-wheelers slipped on roads. Some people were seen helping others by pushing their vehicles stuck on waterlogged roads. The rainwater entered slums on Old GT Road near the Buddha Nullah bridge. Rainwater entered some houses at Shivaji Nagar, Hargobind Nagar and other low-lying areas. Meanwhile, there were reports of rainwater entering shops at Talab Bazar, Gur Mandi, etc.

It was difficult for commuters to pass through heavily flooded Link Road near Preet Palace. The situation was almost similar outside the MC’s Zone C Office and other parts on Gill Road, Ludhiana, Hambran Road, Panj Peer Road, BRS Nagar, Transport Nagar, Old GT Road, Dholewal, Rekhi Cinema Chowk and many other areas. Sewers overflowed too at different locations. A flooded underpass near Chand Cinema was closed for traffic movement.

As the National Highways Authority of India (NHAI) failed to take the required steps as major waterlogging occurred on the Ludhiana-Delhi highway, Ferozpur Road and Chandigarh Road, leaving the commuters to face a lot of inconvenience. The storm water drains are lying defunct on the highways. Meanwhile, some persons also shared videos of waterlogged roads with “Smart City Ludhiana” status on social media.

Leader of Opposition in MC House Harbhajan Singh Dang slammed the Municipal Corporation after heavy waterlogging occurred in various parts of the city. Dang also criticised the civic body for failing to repair the potholed roads due to which the commuters suffered a lot.

“The situation has turned worse in the city these days. There is no proper drainage system in the city, while the civic body failed to ensure the timely cleaning of road gullies,” he added.

About 89 per cent area of the city lacks a storm water drainage system. However, the MC and elected representatives failed to resolve the waterlogging problem in many parts of the city.

A road in Phase II, Dugri, caved in at four points on Thursday. Superintending Engineer, MC, Ravinder Garg said an old sewer line is passing beneath the road. An underground wire was also seen at one of the sites where a portion of the road caved in. MC staff was deployed to repair the damaged portion.

An elderly woman, Nirmal Kaur, was injured after the roof of an old house collapsed on Hambran Road here.

Shiv Charan, a relative of the woman, said, “The house was old and its roof collapsed today amid rainfall. Nirmal Kaur has received multiple injuries on body parts, including head and hand.”