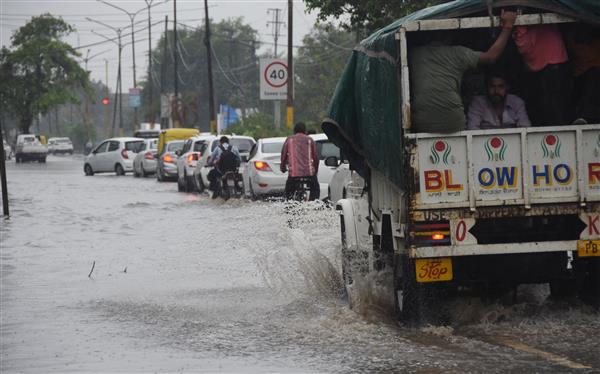 Waterlogging occurred in several areas after rain lashed city on Saturday. It began to rain in the morning. Sewers overflowed once again near Police Colony Chowk on Chandigarh Road and Panj Peer Road among other areas as the Municipal Corporation (MC) failed to resolve years’ old issue. Residents suffered as they commuted on waterlogged roads in the city.

Notably, the PAU’s Department of Climate Change and Agricultural Meteorology recorded 40.2 mm rainfall till 2:30 pm today. However, it continued to rain till evening.

A Sector 39 resident on Chandigarh Road, Premjeet Singh, said his complaints to the Department of Local Bodies and the MC had fallen on deaf ears as nothing was done to resolve the issue of overflowing sewers whenever it rained.

“Black colour water accumulated outside our house and nearby parks once again. Sewers are overflowing as usual after it started raining today. It seems dyeing units still dump their coloured waste water in MC’s sewer lines. The matter should be probed and the issue of overflowing sewage during rainy days must be resolved at the earliest,” he said.

Besides, residents of Panj Peer Road, which falls under Ward No. 78 from where Mayor Balkar Singh Sandhu is the sitting councillor, faced inconveniences due to overflowing sewers.

“Whenever it rains, sewers start overflowing here leaving the road flooded. Despite repeated complaints to the civic body, the issue has not been resolved,” said a resident.

Meanwhile, there were reports of waterlogging in some areas of BRS Nagar, Bhai Bala Chowk, different locations on Hambran Road and several other parts of the city.

The MC’s Superintending Engineer (O&M Branch), Rajinder Singh, said there was no complaint about major waterlogging in the city.