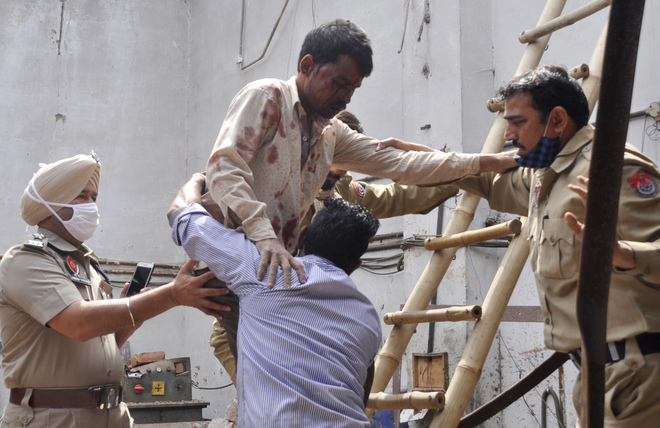 A labourer being rescued by the police after the roof of a factory at Baba Mukand Singh Nagar, Daba Road, collapsed in Ludhiana. Tribune photo: Himanshu Mahajan

Three years after the incident of a plastic manufacturing unit fire and its collapse, wherein 16 persons, including nine firefighters, had lost their lives, it seems the MC has not learnt any lesson to stop the blatant violations of the building by-laws in the city.

Another major incident took place when a factory roof collapsed this morning, leaving four dead and several injured. According to information, no permission was taken by the owner of Jasmail Singh & Sons’ auto-parts manufacturing unit to raise the level of roof by using jacks.

Municipal Corporation officials said the raising of the roof level by using jacks was against the rules and no permission could be granted for the same.

The raising the level of roof is a very common practice in the city and has been going on for years, but no action has been taken to stop such violations.

Inquiry report not made public

n After 16 persons had died in a plastic manufacturing unit fire and collapse incident near Suffian Chowk in 2017, CM Capt Amarinder Singh had ordered an inquiry, which was conducted by the then Divisional Commissioner, Patiala. Kin of a firefighter, who had lost his life in the incident, had demanded that the inquiry report should be read before public at the tragedy site. However, that inquiry report has not been made public.

An official of the MC’s Building Branch, who was present at the incident site, said, “It seems the level of roof was seven feet on the second floor and the factory owner wanted to increase it to 10 or 11 feet. Jacks were used for raising the roof level. For every one jack, one person is placed for support. It seems the walls of the factory building were also weak. Along with the roof, the walls of two sides of the building also collapsed.”

Municipal Town Planner SS Bindra said, “No permission can be granted for raising the roof level as per the rules. Raising the roof by using jacks is a risky work. We are looking into the factory roof collapse incident.”

Bindra said, “The factory where today’s incident took place is said to be around 30-35 years’ old as per the neighbours.”

Rashpal Singh Gabria, whose office is located in the area, said, “The MC should conduct a survey of the under-construction or already constructed buildings in the area. Required action should be taken against the violations of building by-laws in the factories.”