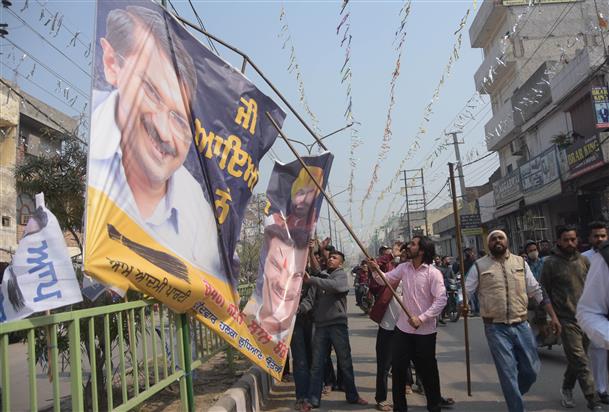 Enraged over the installation of political hoardings by the Aam Aadmi Party in the Sundar Nagar area where the ‘shobha yatra’ on the eve of Guru Ravidas Jyanti was to be taken out, Ravidassia community members today hurriedly removed all such political hoardings.

“We have planned a shobha yatra in Sundar Nagar today and the AAP has flooded the each nook and corner of the stretch with their political hoardings. Palanquin is to cross from this stretch and the AAP has installed hoardings having broom (jharoo) on them. It will be disrespect to our Guru if palanquin cross beneath the political hoardings having broom,” said a Ravidassia community member while removing the hoardings.

Community members said the Aam Aadmi Party was aware that the ‘shobha yatra’ will be conducted today and hundreds of devotees would take part in it, due to this they installed their hoardings and also planned their roadshow on the same road to catch the attention of the Ravidas community.

Aam Aadmi Party candidate Ashok Prashar Pappi from the Ludhiana Central constituency, who was there at the spot, said they have full respect for Guru Ravidas and political hoardings were not installed intentionally ahead of the ‘shobha yatra’. “We respect Guru Ravidas and our workers themselves removed hoardings when community members raised objection,” added Pappi.

Meanwhile, SAD candidate from the Ludhiana East constituency Ranjit Singh Dhillon went live on Facebook and condemned the AAP for installing hoardings on the stretch to catch support of the Ravidassia community. Dhillon said the Guru Ravidas Gurdwara Management Committee, Jodhewal, also condemned the AAP for this.