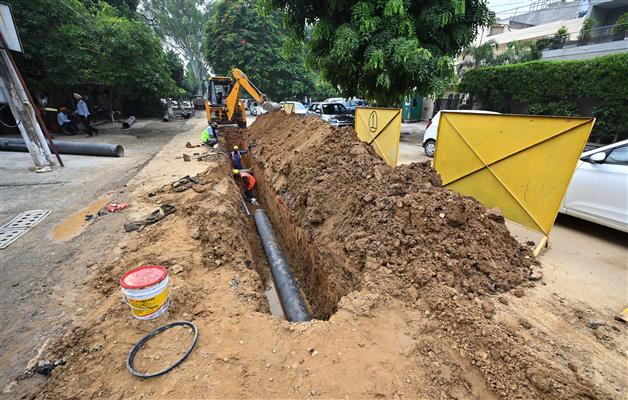 A stretch of Gurdwara Road in Sarabha Nagar that is in a good condition was dug up for the installation of pipes for 24x7 canal water supply in an ABD area under the Smart City Mission.

‘Funds being wasted due to poor planning’

“If the project was approved a few years ago, the pipes should have been installed before carrying out any road recarpeting work. Now, more funds will be spent on repair of roads that have been dug up. Such poor planning in development projects will only waste public money,” a resident said.

According to information, the work related to laying of water supply pipes was to be carried out a few years ago but it was delayed due to some reasons. Meanwhile, the road was recarpeted by ‘ignoring’ the proposal to lay water pipes there.

Questions are being raised as to why proper planning was not done before carrying out such a development project. A civil engineer and city resident, Baljeet Singh, said it was the responsibility of the civic body to do meticulous planning before launching any such development project.

“If the project was approved a few years ago, the pipes should have been installed before carrying out any road recarpeting work. Now, more funds will be spent on the repair of roads that have been dug up. Such poor planning in development projects will only waste public money,” he said.

A resident of Sarabha Nagar said they had opposed the work to install interlocking tiles earlier also as the road portions were yet to be dug up for the installation of water pipes.

“Now, the work is underway to install water pipes in Sarabha Nagar. After laying them, the authorities concerned should ensure proper soil compaction to avoid road cave-ins”, he said.

Ludhiana West MLA Gurpreet Gogi alleged that the Smart City Mission project regarding the installation of water supply pipes in ABD areas for 24x7 water supply was earlier stalled by a minister during the previous regime. “We will get road portions, wherein trenches for pipes are dug up, repaired,” he said. Mayor Balkar Sandhu said roads in the ABD areas had to be dug up for installation of water pipes. These roads would be repaired, he said.