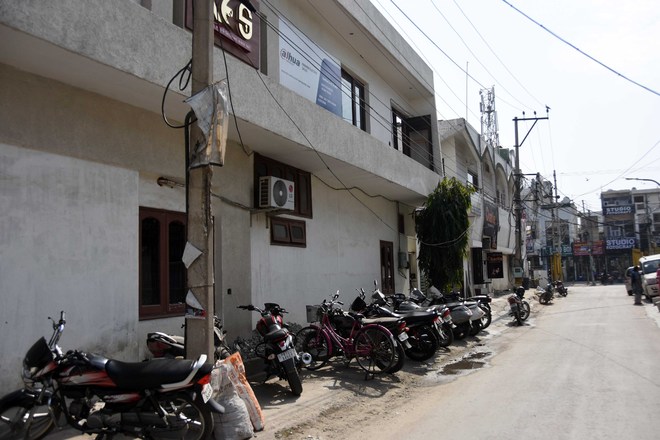 Residents of Block C, BRS Nagar, had submitted a complaint around a month ago at the MC’s Zone D office against commercial activities in the area but these are going on unabated. Photo: Ashwani Dhiman

Even a month after filing a complaint, a group of residents are waiting for the attention of the Municipal Corporation (MC) authorities towards commercial activities in the Block C of Bhai Randhir Singh (BRS) Nagar here.

The residents had submitted the complaint at the MC’s Zone D office against the alleged unlawful activities. They blamed the civic body for not stopping the violations near their houses even after filing the complaint.

The complainants alleged that the unauthorised activities were going on in the street due to which they were forced to face inconvenience. Commercial vehicles were usually parked in the street for loading and unloading of goods. Moreover, workers park their vehicles outside buildings where the activities were taking place.

“We have been staying here for a long time. Earlier, the area was peaceful. But, we have been facing inconvenience for the past few years due to commercial activities. Such activities in residential areas must be stopped. We appeal to the MC authorities to take immediate steps to stop the same in our street,” said another complainant.

However, Municipal Town Planner SS Bindra said: “We have sent notices to those running commercial activities in the area. If such activities are not stopped, we will conduct a sealing drive against the violations.”

Notably, commercial activities are common in various residential areas of the city.