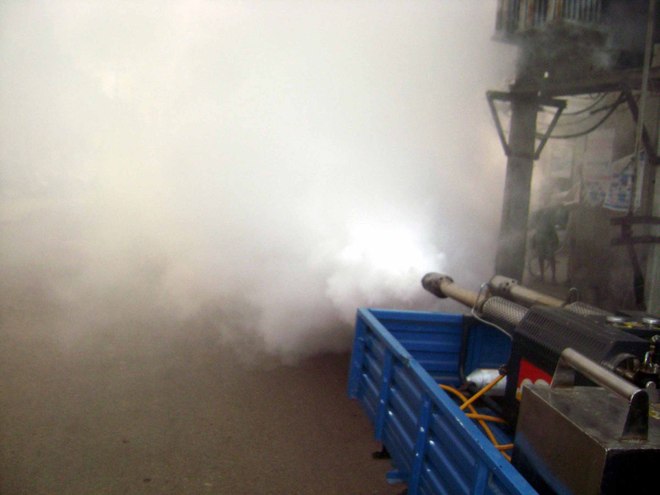 No material for running small machines

Though the MC claimed to have started fogging in July, residents complained that the activity is not being conducted for controlling mosquitoes in their respective areas.

Health Department teams had already found larvae of aedes aegypti mosquitoes, which can spread dengue and chikungunya, from several locations in the city during this rainy season.

The civic body had started fogging with only big machines last month while many areas are yet to be covered. Despite repeated demands by councillors, the MC has failed to provide them required material, including fuel and insecticides, for running small handy fogging machines.

The residents from various areas have sought from the Municipal Corporation to conduct fogging properly for the prevention of vector-borne diseases.

Keemti Rawal, a resident of Chandar Nagar, said: “The MC has not conducted fogging in various parts of the city. It has also not been done in a number of streets in Chandar Nagar and nearby areas. The MC should reveal its plan for the prevention of vector-borne diseases. The authorities usually wake up from its deep slumber after several cases are reported. The civic body should ensure timely and proper fogging in all parts of the city. It should start a helpline number so that the residents can make request for fogging in their respective areas.”

RK Yadav of Laxman Nagar, Giaspura, said: “Mosquitoes are common these days but no fogging is being conducted in our area. The MC should conduct the same in a proper manner in the area. Stagnant water in many places should be removed to avoid breeding of mosquitoes.”

A resident of Dhandari said: “Fogging was conducted once in selected streets only. A number of streets were left. The MC must ensure that the activity should be done in all streets.”

Leader of the Opposition in the MC House Harbhajan Singh Dang said the civic body sends a big machine for fogging but all areas in any ward could not be covered with the big machine in one go.

“I am receiving calls from residents who request for fogging in their respective areas. I requested civic body officials to provide required material to councillors to conduct fogging with small machines but to no avail. I will talk to the Mayor in this regard,” he said.

However, MC officials claimed that fogging with big machines was being done as per the schedule.

There are only 14 big machines for 95 wards of the city. However, a small machine was available for each ward, as per information. But the MC was not providing the required material for running the small machines as of now.

MC’s health officer and nodal officer for the fogging drive Vipul Malhotra said he had no information when to start fogging with small machines in 95 wards of the city.