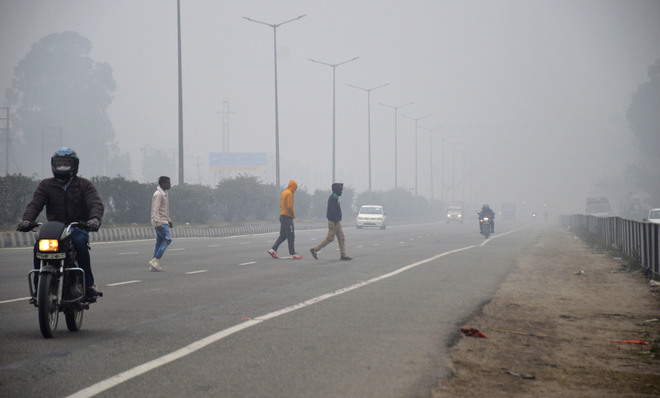 Pedestrians cross the NH-44 near the Jalandhar bypass in Ludhiana. Photo: Inderjeet Verma

Concerned over their safety, residents have reiterated their demand for a foot overbridge on NH-44 near Jalandhar bypass.

A number of fatal mishaps have also taken place on the stretch but the authorities concerned are yet to pay any attention.

The residents of nearby areas have been demanding from the government and NHAI authorities for a long time to setup the foot over bridge for the convenience of pedestrians. They told that since the stretch was widened on the national highway, it is difficult for the pedestrians to reach other side of road.

Dr Kuljeet Singh Bhalla, who lives in Aman Nagar near the Jalandhar bypass, said, “We have been demanding a FOB should be constructed near the Jalandhar bypass for a long time but to no avail. A number of mishaps have taken place on the stretch. Two sisters had earlier died in a mishap when they were crossing the highway stretch. We had written to MP Ravneet Singh Bittu that a foot overbridge should be constructed for the safety of the pedestrians. However, we are still waiting for the government and authorities attention.”

Surinder Kumar, a resident, said, “In the absence of a foot overbridge, the pedestrians are forced to suffer a lot. They cross the highway by putting their life on risk. There are a few educational institutes near here too. School students are at a great risk. We urge the government and authorities concerned for early construction of the FOB so that mishaps can be averted.”

Divya, Councillor, Ward Number 1, had highlighted the matter for construction of foot overbridge. Her father, Vijay Danav, who is a senior leader of Shiromani Akali Dal, said, “There is a dire need of a foot overbridge. The NHAI authorities should construct one at the earliest.”

Virendra Kumar, Project Director, NHAI, said he will look into the matter.