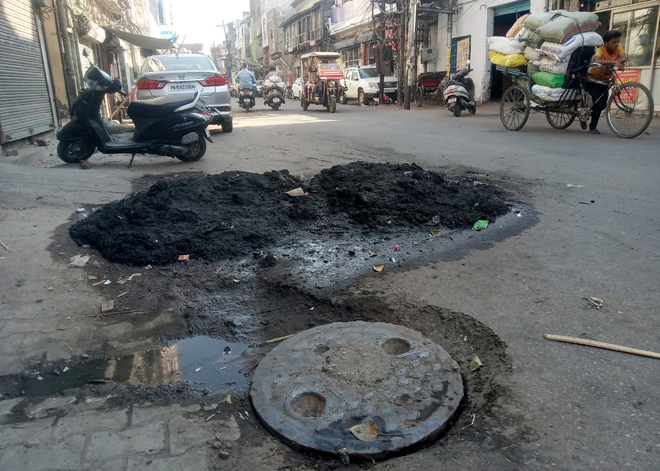 Sewage lying in open near a manhole in Ludhiana. Photo: Himanshu Mahajan

Despite major issues like air pollution, highly polluted Buddha Nullah, unsanitary conditions, traffic snarls, improper waste management, broken roads, fatal mishaps, lack of facilities at government hospitals and shortage of staff at government schools etc not having been resolved for a long time, Ludhiana city has been ranked 14th among the cities (under million plus population category) in the Ministry of Housing and Urban Affairs’ ranking for the “Ease of Living Index 2020” in the country.

After the announcement of rankings for the rankings, questions are being raised many. The ground reality of the city is that many issues have not been resolved here for decades. In the index, Ludhiana scored the 14th rank, with overall 57.36 score in million plus population cities of the country. In the pillar-wise performance, Ludhiana scored 56 for Quality of Life, 26.25 for Economic Ability and 55.25 for Sustainability. In the Citizen Perception Survey, Ludhiana scored 75.9 score out of 100. Notably, 49 urban local bodies had participated in the survey. Chandigarh has ranked 29.

Chairman of the Indian Institute of Architects, Punjab Chapter, Sanjay Goel, said, “I don’t agree with the ranking for the ‘Ease of Living Index’ as a lot of issues in the city are yet to be resolved. Ludhiana is still far away from comfort and good living conditions. Ludhiana is required to be developed as a smart city. We should work to make the city better. There is a need to pay focus on the ground reality. The feedback should be taken from the people by visiting door to door.”

Goel said, “Ludhiana is an unplanned city, with issues like traffic snarls, air pollution, illegal constructions and many others common here. The feedback from the middle class and economically weaker sections should also be taken,” he said.

Choked sewers is a major problem in a number of city areas like Dhandari Khurd, Prem Nagar, EWS Colony, Ishwar Colony, Giaspura, Ludhiana east constituency wards and others. Due to overflowing sewage, water remains accumulated in many streets and outside the houses in these areas. Residents are suffering and living under the threat of diseases.

Sukhwinder Singh of Dhandari Khurd said, “I don’t know when such survey was conducted here. The fact is that the people are forced to live under unsanitary conditions here in our area. In morning, sewers start overflowing badly near my house. We have staged multiple protests in the past, but to no avail.”

Whenever it rains, water-logging is witnessed in many city areas and sewers start overflowing on Chandigarh Road, Panj Peer Road and other areas.

The uncovered garbage is crying for attention for the past many years. The MC has failed to ensure waste processing properly. Big heaps of waste are being ignored at the MC’s main garbage dump near Kakka village. Inder Aggarwal, BJP leader and former councillor, said, “I don’t know when the citizen perception survey was done here. The drainage system and solid waste management are poor in the city. Water-logging is common whenever it rains heavily.”

Congress leader Parminder Mehta said, “A lot of issues are yet to be resolved by the MC. Many roads are in a poor condition as patch work is not being done. If the feedback is good according to the survey, why the issues on ground level still exist? The authorities should highlight the truth so that the governments can take the required steps for improvement.”

A number of persons have lost their lives in road mishaps as road safety is being ignored for a long time. Foot paths are available in only some areas of the city. Out of the 91 black spots identified in Ludhiana, the maximum 35 black spots were identified at a stretch from Sahnewal and Ladhowal on National Highway 44 as per report on “Accident Black Spot Identification & Rectification Program on Various Highways/Roads of Punjab” prepared under the Tandrust Punjab Mission. Besides, nothing has been done to improve the public transportation in the city. Earlier a city bus service was launched with much fanfare, but many of the buses are not being run at present.

Ludhiana is major city of the state, but the successive governments have failed to make sure the availability of the required infrastructure at the Civil Hospital. Serious patients, who can’t afford expensive treatment at private hospitals in the city, are generally referred from the Civil Hospital to the PGIMER, Chandigarh, or Government Hospital, Patiala. A number of times, the patients have lost their lives on the way during shifting. MLA Balwinder Singh Bains said, “I don’t agree much with the survey. Nobody had even informed us about the survey when it was done. There is a dire need to improve living conditions here. The reforms should be brought in health and education sectors.”

Ludhiana is an industrial town where lakhs of labourers of other states like UP and Bihar are working in a large number, but many of them are forced to live in poor sanitary conditions at unauthorised vehras wherein average 50 persons use one toilet. Due to their low income, they can’t afford better accommodation for living. President of Textile Hosiery Kamgar Union Punjab, Rajwinder, said, “There are lakhs of labourers in the city. Nobody had approached them for the survey. There is no affordable housing scheme for labourers. The government health services are poor. Infrastructure at government schools needs to be improved. The authorities should come and see how labourers live under poor living conditions. Such survey is not correct. If the survey was done among labourers and economically weaker sections, they would have spoken the truth about the actual situation.”

Ludhiana is one of the most polluted cities in the country. In several areas, the ash emanating from factories falls on houses, leaving the residents to suffer from respiratory problems. MLA Sanjay Talwar had raised the issue of air pollution multiple times before the PPCB and the MC in the past, but to no avail.

MC chief Pardeep Kumar Sabharwal said, “We are working to resolve the issues. Development and improvement are continuous processes. We are working to improve air quality. The ‘Project for Rejuvenation of Buddha Nullah’ is under way.”