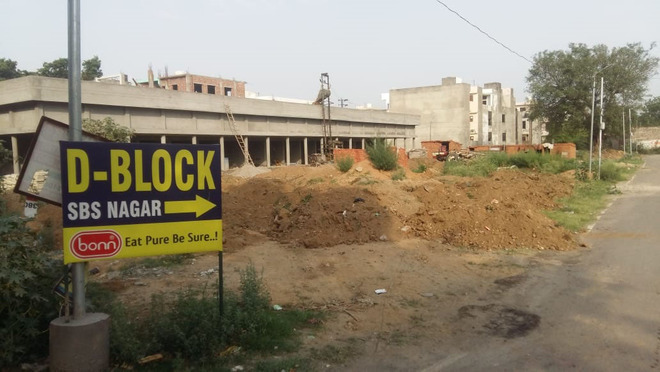 Debris dumped in the open in an area of Shaheed Bhagat Singh Nagar colony in Ludhiana. Tribune photo

Irked over alarming rise in environmental pollution and public nuisance created by mounds of building material, sand and debris in the outer area of the Shaheed Bhagat Singh (SBS) Nagar locality illegally by contractors engaged by the Ludhiana Improvement Trust (LIT) for laying interlocking tiles, residents of the D and E blocks of the colony have filed a petition with the Punjab State Human Rights Commission (PSHRC) to rid them of this health hazard.

Seeking immediate intervention of the PSHRC as the fundamental ‘right to life’ of the public was under threat from the conditions created due to negligence of the LIT authorities and contractors engaged by them, Arvind Sharma, a resident of the E block of the colony, has said dumping building material, dug out sand and debris from streets where interlocking tiles were being laid by contractors engaged by the LIT, has made the life of residents of Shaheed Bhagat Singh Nagar, especially those residing in the D and E blocks, miserable.

“Mounds of sand, debris and building material illegally dumped in front of constructed commercial pocket (booths) in the D block, fly into houses and turns into mud even during light showers. If remain unchecked, it could lead to many serious respiratory ailments among residents due to the rise in environmental pollution,” said the petition.

Attaching photographic evidence of heaps of sand, debris and other material with the complaint, Sharma has maintained that it was not the first instance of such gross negligence on the part of LIT officials, most of whom have affinity to the contractors assigned various development works.

“More often than not, the contractors create unhygienic conditions for residents where development projects are undertaken and LIT field staff and officials, having a soft corner for contractors, look the other way, thereby compromising interests of the residents of affected areas,” the complainant said. — OC