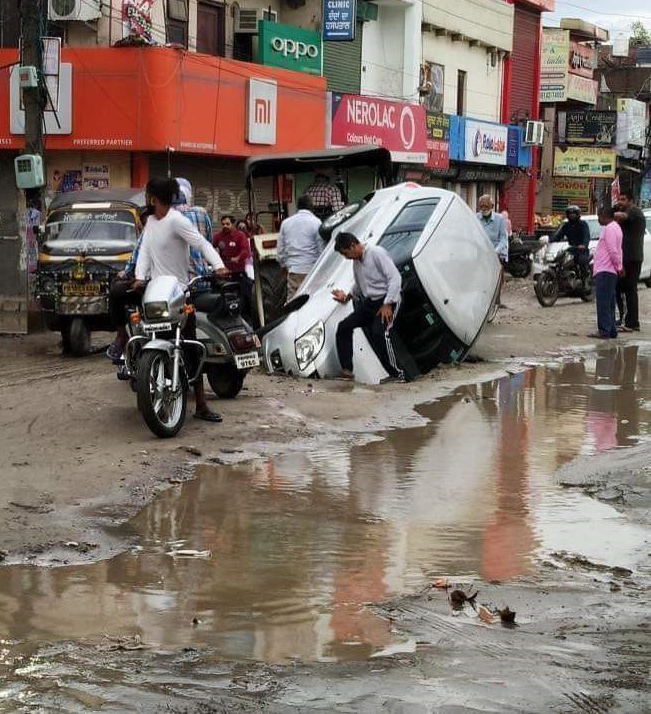 A car got stuck in the Haibowal area after road caved in due to heavy rain in Ludhiana. Tribune Photo

Moderate to heavy rain, accompanied by high-velocity winds, lashed the city since late last evening and showers persisted almost through the night.

On the Sunday morning, residents in several localities in the city woke up to find rain water accumulated all over streets, roads and markets. Low-lying areas and many residential localities on both sides of the Buddha Nullah were worst affected.

In the overflowing water of the Buddha Nullah in New Shivpuri, a scooter was nearly washed away and passers-by, who had gathered in a large number, saved the two-wheeler and its rider after facing some difficult time.

On the Haibowal main road, a car was half sunk in a big pit due to the cave-in of a portion of road which had undergone extensive repairs recently. The occupant of the vehicle had a miraculous escape. Later, the Municipal Corporation repaired the caved-in portion of the road.

Though MC officials attribute accumulation of rainwater as a regular feature during rains and justify the same on the ground that the city had either little or no rainwater drainage system, the fact remained that the submerged areas, especially posh and fully developed localities, had exposed tall claims of development of urban infrastructure in the city and host of projects under the so-called ‘Smart City Mission.’

“If residents are made to live with waterlogging during rains, overflowing sewers, poor sanitation, bad roads and erratic power supply, then what kind of smart city is being developed for people,” said a resident of BRS Nagar.