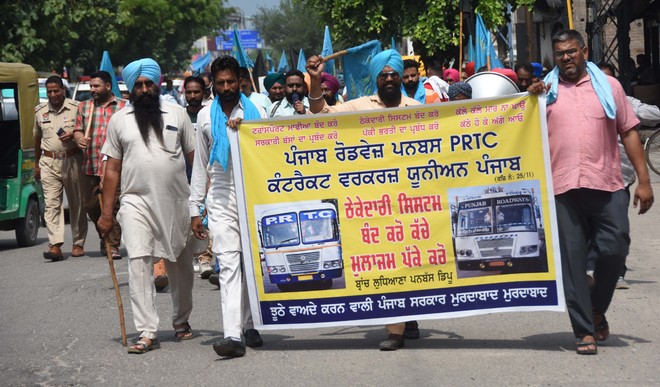 Members of the Punjab Roadways, PUNBUS and PRTC Contract Workers Union take out a march in Ludhiana. Ashwani Dhiman

Members of the Punjab Roadways, PUNBUS and PRTC Contract Workers Union Punjab continued their strike for the eighth day today. The employees carried out a protest march against the state government in the city on Monday, demanding regularisation of their jobs.

The contractual employees had gone on an indefinite strike on September 6, resulting in a majority of the government-run buses going off roads.

The protesters have been demanding regularisation of their services for a long time. They have also demanded that a new fleet of buses be added to the service.

Union leader Satnam Singh said they carried out a protest march in the city and appealed to people to support their agitation. The protesters said they had been fighting for their rights but the state government had failed to meet their demands.

The members further said that a delegation of the union is supposed to meet the Chief Minister tomorrow. —TNS