No one will be spared once it is verified: Krishna Das 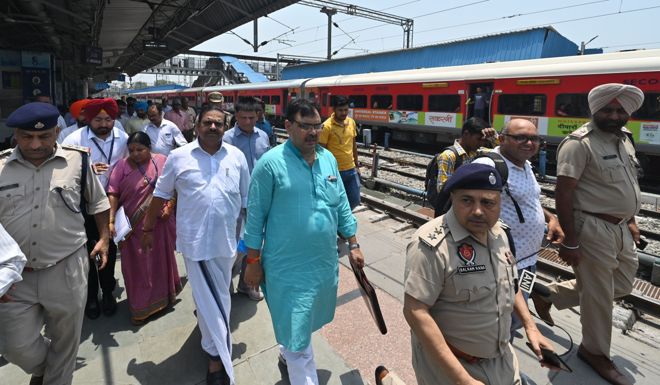 PK Krishna Das, chairman of the Public Amenities Committee, Ministry of Railways, today visited the Ludhiana railway station to check the amenities and facilities for passengers. He also accessed the loss of the Railway property during the protests against the Agnipath scheme.

On the issue of the recent violence at the railway station in which protesters damaged its property, Krishna Das said it was suspected that there was a role of some political parties in the violence and the agencies were verifying it. Once the role is verified, the Central agencies and the police would not spare anyone.

“Regarding the damage to the Railway property by protesters, I discussed it with RPF and GRP officials and asked them for a detailed and impartial inquiry. If any politician, political party or any organisation had hatched a conspiracy, the Central agencies will take strict action against the guilty. The agencies are also keeping tab on the ongoing probe,” said the chairman. He got angry after seeing the lack of water inside public conveniences. He instructed the railway officials to take action against the contactor. He also found shortage of water dispensers at the railway station. He assured that the problem of drinking water would be solved as soon as possible.

250 CCTV cameras to be installed at railway station

PAC chairman Krishna Das said to strengthen the security of the railway station, a total of 250 cameras would be made functional. At present, the railway station has only 89 CCTVs, which are not enough to keep a tab on anti-social elements. Even the strength of GRP and RPF personnel is also being increased to ensure full-proof security. Special focus will be laid on to increase the number of women cops in the RPF.