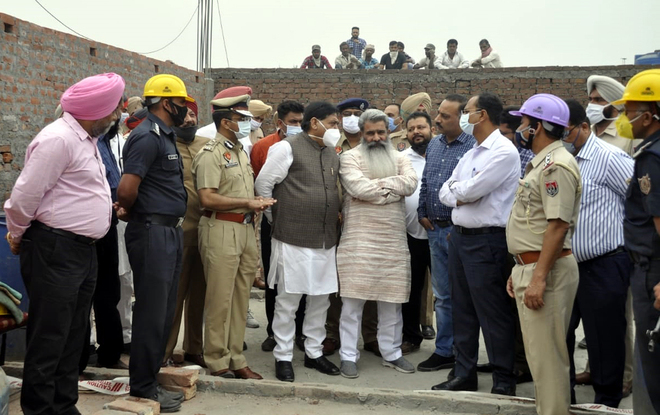 Punjab Food, Civil, Supplies and Consumer Affairs Minister Bharat Bhushan Ashu, accompanied by Industry and Commerce Minister Sunder Sham Arora, today inspected the site at Baba Mukand Singh Nagar where the roof of a four-storeyed auto-part factory had collapsed on Monday, killing four persons and injuring seven workers. The roof had caved in while the level of lintel was being illegally raised with the help of jacks (lifting machines).

Both Ashu and Arora termed the incident very unfortunate and said all possible assistance was being provided to the affected families and the injured workers. “A magisterial probe has already been ordered into the tragic incident to find out the negligence on the part of any government official and once the responsibility is fixed none of the guilty persons, including government officials, if any, will be spared,” the ministers added.

The Cabinet Ministers made a fervent appeal to the people not to put any life at risk for their vested interest and take proper permission from the authorities concerned if the work intended to be carried out was allowed as per law in addition to ensuring all prescribed safety standards during the construction.

Deputy Commissioner Varinder Kumar Sharma told the ministers that the NDRF along with the SDRF, MC, fire brigade and local police had been working tirelessly since Monday morning and rescued 36 labourers, out of which five were under treatment. Of the five injured workers, two critically wounded persons in critical condition were undergoing treatment at SPS Hospital, while three others were admitted to Civil Hospital. All others who had sustained injuries were discharged after first aid.

DC Varinder Kumar Sharma said the entire third floor of the building where roof had collapsed, was completely cleared and no one was trapped in the debris. Teams of the NDRF and SDRF and other volunteers were clearing debris from the site, which was expected to take two more days.

He confirmed that the death toll in the tragedy remained at four and bodies of the deceased workers were handed over to next of kin or sent to their families in Bihar for cremation. Five workers injured in the mishap were still admitted to SPS Hospital (3) and Civil Hospital (2) with two of them still in a critical condition.

The Ludhiana police have arrested the building owner Jaswinder Singh Sonu while contractor Mohd Harun is yet to be arrested. The police said efforts were on to nab the accused.