Structure allegedly being raised on land attached by ED 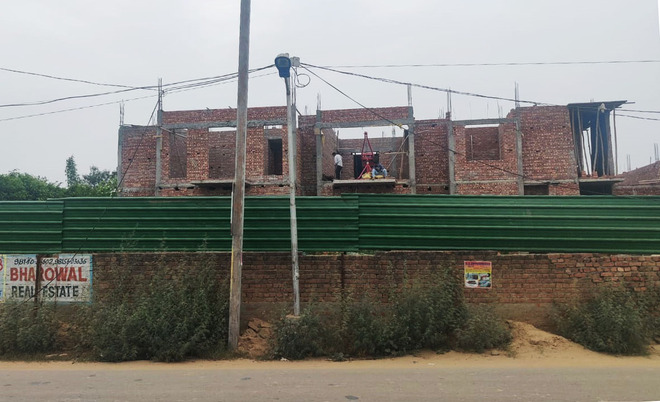 Irregularities and illegalities galore in an under-construction residential building being raised in the staggered area of around 4,000 square yards by a politically-connected government official on a road linking Ayali village to Sidhwan Canal here.

Earlier, a complaint was lodged by former DSP Balwinder Singh Sekhon with the Punjab Chief Minister that the building was being constructed without any approved plan, payment of the change of land use (CLU) charges and NOC from the Greater Ludhiana Area Development Authority (GLADA) thereby causing huge loss of revenue to the government exchequer.

Besides, the residential building was being constructed by throwing all norms, building bylaws and other rules to the winds. It has now come to the fore that a part of the land under the building had been attached by the Enforcement Directorate (ED) on the alleged charge of money laundering against a city-based business family.

In this regard, the ED officials had lodged an FIR (No. 93 dated May 28, 2021) under Sections 420/421/465/467/468/471 IPC against Kailash Aggarwal, Rajni Aggarwal and others charging them with selling attached properties of M/s Genex Infratech Limited and fraudulently siphoning off huge funds. (Copy of FIR is available with The Tribune).

In their complaint to the police the Enforcement Directorate officials stated that the matter was being taken up with revenue officials concerned for cancellation of mutations of the part of the land, which being properties of the directorate, had been sold in a fraudulent manner with forged and fabricated documents.

Knowledgeable sources maintain that some part of the land where residential building was being constructed by the government official had been attached by the ED.

Even Greater Ludhiana Area Development Authority officials were in the dark about the ownership of the land. A team of officials had visited the site and issued directions to stop further construction henceforth as the building was being raised without any approved plan, payment of the

Senior Greater Ludhiana Area Development Authority officials said they had no official information whether part of the land where residential building was being constructed had been attached by the ED or that its ownership was questionable.

A notice was issued to the owner of the building to stop construction, which was in violation

of bylaws and without any statutory approval, they added.

However, as things stand at present the construction work was continuing as before and only an independent probe could bring out the real truth and expose illegal acts of the government official and those conniving with him, said Sekhon. — OC