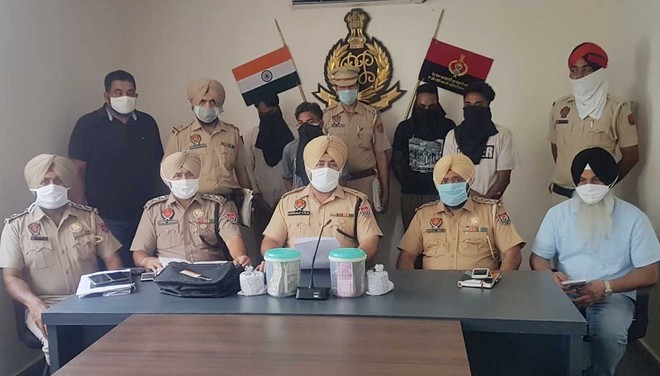 The suspects in police custody on Saturday. Tribune photo

The Ludhiana police today claimed to have solved the loot of Rs 11 lakh belonging to a gas agency with the arrest of four persons.

The suspects have been identified as Vikram Singh Romi of Shimlapuri, Parminder Singh of Basant Nagar, Varinder Singh of Jujhar Nagar and Parminder Singh of Ishar Nagar. The police have recovered Rs 5.97 lakh, 130 gram of drug powder, one motorcycle and documents of the gas agency from them.

The police received secret information that Parminder and Vikram were on the way to deliver a consignment of drugs. Accordingly, a naka was set up and both were nabbed with drug powder. On the basis of disclosures made by them during their questioning, two of their accomplices were nabbed and cash recovered from them.

Agrawal said the gang had carried out recce of the area for three days before the robbery. Their accomplice, Jasbir Singh Paharia, is at large.