Company worker connived with suspects in the crime 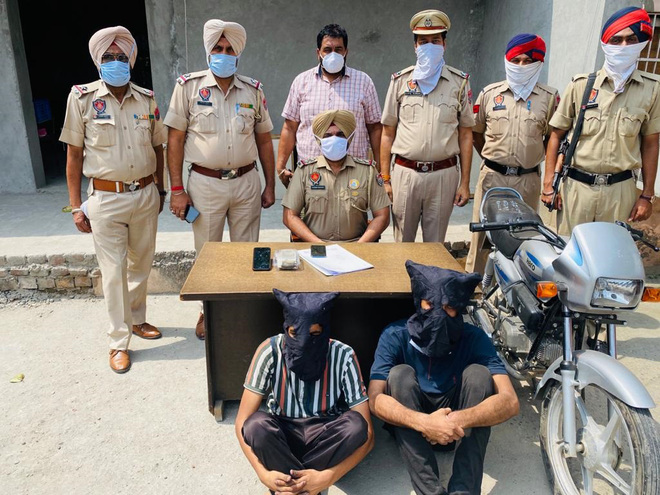 The robbery suspects in the custody of the police in Ludhiana on Wednesday. Tribune photo

The police have solved Rs 2.80 lakh robbery case, which was reported outside a bank on Gill Road on September 1. The police arrested two suspects in the case while six were still at large.

Those arrested have been identified as Arjinder Singh, alias Robin Chacha, of Guru Arjan Dev Nagar, and Deepak Lalka Dabbu of Deep Nagar, the CP said. The police recovered Rs 43,500 cash from the suspects, the CP added.

Since Arjinder was working in a Fine Bearing Company so he was aware about the movement of cash, the CP said. On August 29, Arjinder held a meeting with other aides identified as Gurpreet Kalsi, Himanshu Marwaha, Deepak Dabbu, Kashish Bhinder, Kutan Sachdeva, Abhijit Mand and Mudit Sood, the CP added.

Mudit, Kashish, Abhijit, and Kuntal were already wanted in some cases, including an attempt to murder, the CP said. They wanted to commit some loot, the CP added. Robin told them that their company employee Kuljit Singh (72) used to visit bank to deposit cash running into lakhs and he could be made an easy target, the CP said.

On September 1, when Kuljit was about to leave for bank, Robin informed his aides about how to identify Kuljit and told them to loot cash from him, the CP added.

Himanshu, Abhijit and Mudit used a bike to loot cash, the CP said. The moment Kuljit reached bank, the trio snatched cash bag from outside IndusInd Bank and fled, the CP added.

After committing the crime, they went to Gurpreet’s house to distribute cash, the CP said.