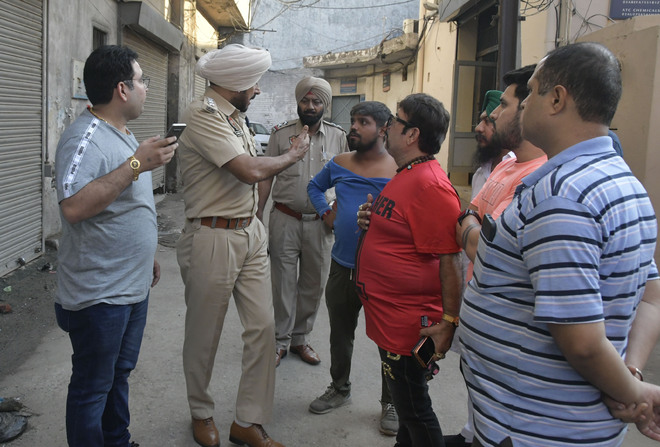 Police officials conduct a probe after the robbery at Millerganj in Ludhiana on Friday. Photo: Aswani Dhiman

The police said the matter is suspicious and questioning of the employees is on.

Trader Deepak Anand, alias Shankar, said he had sent two of his employees, namely Gagandeep and Prince, to bring Rs 35 lakh from a jeweller of Sarafa Bazaar to whom he had sold gold.

“This evening when both employees reached outside my office, two armed motorcycle-borne persons came and snatched the bag containing cash from them,” said Deepak Anand in his complainant.

Deepak said his employee Gagandeep also had licensed revolver but he didn’t even protest or fire from his weapon. He suspected the role of Gagandeep and Prince as both of them had not even tried to chase the robbers.

After the incident, ACP Randhir Singh reached the spot and started a probe.

The ACP said the matter seems suspicious and both the employees are being questioned to find the truth. “We are also checking the CCTV cameras of the area and even the call details of the employees are also being scanned,” added the ACP.