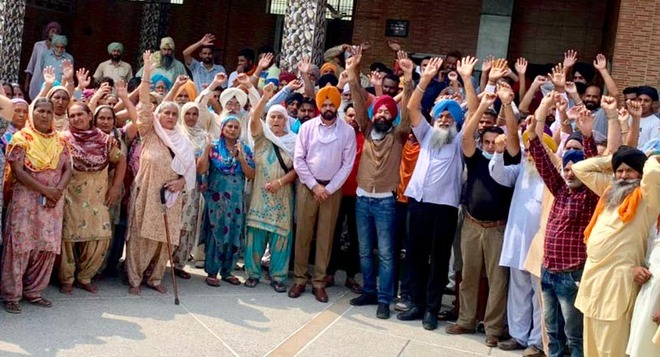 The Ludhiana (Rural) police have initiated a probe into an incident in which a youth of Jangpur village, a SAD activist, who had earlier received bullet injuries in the last by-elections, was booked for allegedly assaulting a family of the same village after forcibly entering their home on Tuesday evening.

Office-bearers and activists of the Shiromani Akali Dal (SAD), led by Dakha legislator Manpreet Singh Ayali, had urged the higher authorities to either cancel the FIR or remove names of SAD activists, including Gurpreet Singh Gogi, who according to Ayali had been shot at by supporters of defeated Congress candidate Captain Sandeep Singh Sandhu during the byelections for the constituency on October 21, 2019.

Ayali alleged that Dakha SHO Prem Singh had implicated Gurpreet Singh Gogi’s name in the FIR to appease Congress leaders who wanted to get the FIR registered against their leaders and workers cancelled by pressurising Gogi.

The Dakha police had reportedly registered an FIR under sections 307, 336, 323, 506, 148 and 149 of the Indian Penal Code (IPC) against at least 10 Congress activists in connection with an incident in which Gogi had received bullet injuries on his foot during polling at Jangpur village last year.

However, Sukhdarshan Kaur, in presence of legislator Manpreet Ayali and other protesters, refused to identify Gogi and his associates as intruders to her house.

Ludhiana (Rural) Senior Superintendent of Police Vivek Sheel Soni said he had already ordered a probe into the incident.