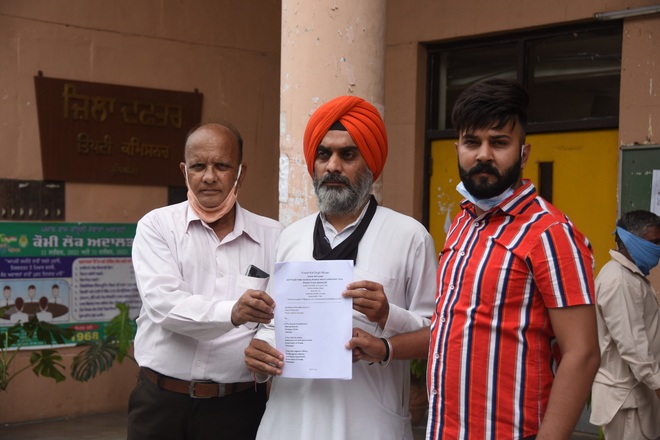 BJP leaders with a complaint submitted to the Deputy Commissioner in Ludhiana. Photo: Ashwani Dhiman

After vehemently opposing the sale of the prime chunk of land at cheap rate through e-auction by the Ludhiana Improvement Trust (LIT), which was subsequently cancelled by the state government, the BJP has fired another salvo at the ruling Congress. The party in a complaint lodged with the Deputy Commissioner here today has alleged gross misuse of Nehru Sidhant Kendra Trust Complex in the upmarket commercial area of Feroze Gandhi Market here.

“Even though the land was allotted way back in May 1976 for the sole purpose of promoting and propagating the ideals and philosophy of first Prime Minister of India Jawahar Lal Nehru, most if its area is being put to commercial use in gross violation of the terms and conditions of allotment,” asserted leaders of the BJP.

Quoting from the allotment letter of the land, leaders of the BJP said as per para 15 of the letter it was clearly stated that, “Allotted land to the Nehru Sidhant Kendra will be strictly utilised for the construction of the building in which arrangements will be made to propagate ideals and teachings of Late Pandit Jawahar Lal Nehru and running an educational institution for the purpose.”

It was further stipulated in the agreement for the allotment that no part of the land or building constructed thereon would be sold to anyone in any manner, leaders of the BJP added.

However, the NSK Trust was illegally using the said property from the very beginning only for commercial purpose by constructing illegal shops on it towards Feroze Gandhi Market, said leaders of the BJP.

Not only this, earlier a part of the building had been leased out to Punjab National Bank and presently to the ICICI Bank, leaders of the BJP added.

Besides, more than 30 shops had been sold on goodwill/rented out to various persons illegally and two big halls on Pakhowal roadside were rented out on daily basis for organising private exhibitions and other functions, said leaders of the BJP.

The complainants have demanded an independent high-level probe preferably by the CBI, cancellation of the allotment of the said land for gross misuse and also initiation of criminal proceedings against trustees or their legal heirs.