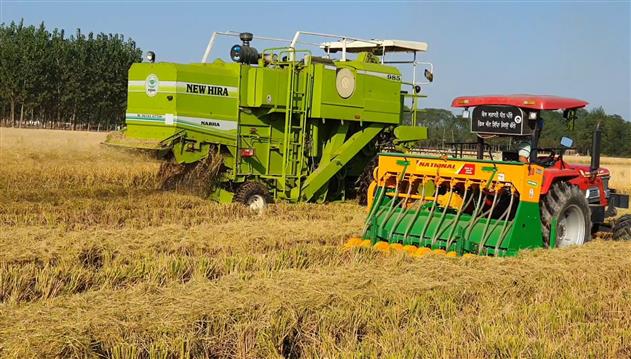 Paddy harvesting using combine and wheat sowing in standing stubble going on simultaneously at a village of Samrala block.

A number of farmers in Samrala block are leading by example in environment conservation by choosing not to burn crop residue. They believe that conserving the environment is their moral responsibility, which must be discharged by everyone. They have been practicing in-situ paddy straw management for years together and regard themselves as successful farmers in the true sense of the term.

“If a farmer is considered to be the son of the soil, does it behove of him to destroy it to the point of no return? We are plundering our own wealth by setting it to fire, destroying its organic matter, killing thousands of living beings, adding chemicals and fertilisers indiscriminately,” said Kulwant Singh of Shamgarh village and Hardeep Singh of Bharthala village, both have been successfully practicing in-situ management of crop residue for the past many years.

Sukhjit Singh of Diwala village, who gave up stubble burning 12 years back, has not only improved his crop quality but also doubled his income. He adopted the latest technology in his field to observe for himself the difference it makes in his living and livelihood. Similarly, Satjit Singh of the same village, who uses Happy seeder and Super seeder for sowing, is fully satisfied as he feels he is contributing from his side to preserve the environment and soil health by not burning the crop residue.

“I observed that the results of wheat, sown with happy seeder, were better as compared to conventional sowing. In conventional methods, even after burning, the field needs to be prepared for wheat sowing, which cost Rs 2,000-2,500 per acre approximately. But with a happy seeder, no field preparation was required as wheat was sown directly resulting in cost saving,” shared Swaranjit Singh of Ghulal village who also runs a custom hiring centre to provide machines to farmers.

Dr GS Makkar, Deputy Director, KVK, Ludhiana, (Samrala) shared, “These farmers have managed paddy straw with the methods and technologies recommended by Punjab Agricultural University, Ludhiana. They have indeed become role models and source of inspiration for other farmers of their nearby villages. They are contributing to preserving the environment and soil health by not burning the crop residue. Due to their motivated thought, they are now the frontline campaigners of KVK, Samrala.”

“We shall shortly organise 15 to 20 awareness camps to educate the farmers regarding CRM technique, Also a five-day training shall be held shortly and IEC demonstrations shall take place alongside,” the director said.