Security up ahead of Bharat bandh 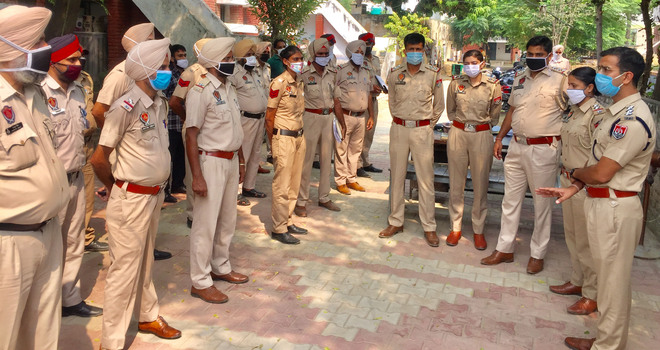 Security has been beefed up in the region ahead of Bharat bandh called by various Kisan Sabhas and political parties on Friday for impressing upon the Union Government to withdraw the three farm Bills. Besides undertaking combing operations in their respective beats, SHOs supervised checking at public places, including bus stands and railway stations.

Flag marches were organised to boost the morale of residents and constituents of various government and private establishments.

Maintaining that surveillance had been enhanced to prevent any untoward incident during protest marches, road blockades or rallies by office-bearers and activists of various farmers’ bodies and political parties, DSP Rajan Sharma said leaders of various outfits had been advised not to create any disturbance during the bandh.

“At the same time we have advised the rank and file in our force to be overcautious during duty,” Rajan Sharma said.

Several residents to reschedule their journeys

Panicked over the national bandh call given by farmer bodies tomorrow to protest against the implementation of the three farm Bills, a large number of residents of the region had decided to reschedule their journeys.

Apprehending inconvenience, a majority of commuters, including those travelling by public transport and private vehicles, chose to stay in areas of their workplaces this evening.

Investigations revealed that the bandh call had spread panic among residents who had planned journeys for the day.

Several employees and traders, who had been commuting, were worried about reaching their destinations on time on Friday.

Sanjiv Kumar Sharma of the Railway Road area, a government official who commutes between Ahmedgarh and Ludhiana by his private vehicle, said he had decided to stay with a relative near his workplace.

“When we know that protesters can block traffic at any place and at any time, why should we risk reaching late at the office. Moreover, it is always advisable to avoid unsavory situations,” said Sanjiv, adding that a substantial number of employees from Dehlon, Kilaraipur, Malaudh, Malerkotla and Barundi, besides local town, had rescheduled their travel plans to avoid any last minute hiccups.

It is feared that protesters would be blocking the traffic on the Ludhiana-Malerkotla, Malerkotla-Khanna, Ahmedgarh-Raikot, Jagera-Payal and Jodhan roads at various points during Friday.