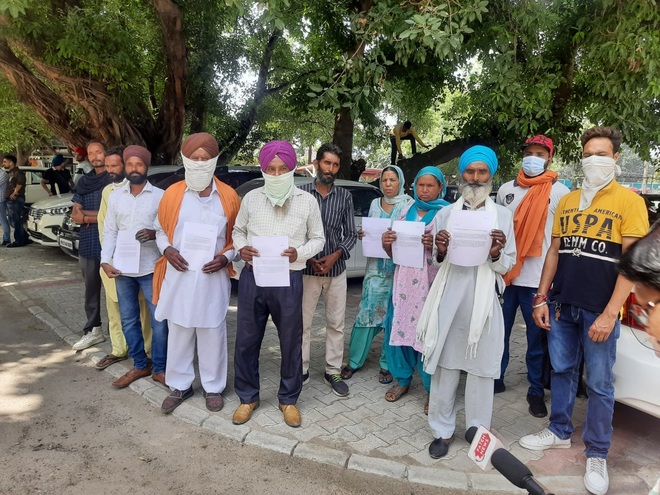 Sekhowal residents said they had been dependent on the land for decades for growing crops. Tribune photo

A group of residents belonging to the Dalit community from Sekhowal village has written to the Chief Minister, requesting him to issue an order to the government department concerned for not selling plots on 416 acres of land in the village for the proposed modern industrial park.

An advertisement was issued by the department concerned to sell the plots on the panchayat land recently, the residents said.

The land was earlier acquired for the industrial park, to be set up near Mattewara Forest and the Sutlej. But, the residents said their families had been dependent on the land for decades as they had been using it for agricultural purposes.

Kashmir Singh of Sekhowal said the PUDA/GLADA had issued an advertisement to sell the plots that increased their woes.

He said: “We are against the government decision to set up an industrial park on the land in Sekhowal village. We have already moved the court over the registration process of the land. We appeal to the CM to order the department concerned to revoke the advertisement and stop the process of selling plots on the land.”

Kashmir said: “Many families of Sekhowal had been using the panchayat land for growing crops for the past 60-70 years. It is our third generation that is dependent on the land as we grow crops there. If the industrial park set up there, our lives would be ruined.”

He said: “The village gram sabha had earlier passed a resolution, refusing to give the land to set up the industrial park. But, the panchayat had sold the land to the government department concerned despite our opposition. The proper process was not followed for the registry of the land.”

Another resident Gurdev Singh said: “We don’t want to see any modern industrial park be set up on the village land. Moreover, Mattewara Forest and the Sutlej are located just near the land. If any industry is set up there, it would be harmful to the environment too.”

Members of a public action committee (PAC) have also been opposing the site of the industrial park. They are demanding from the government not to set up the park at the eco-sensitive location.