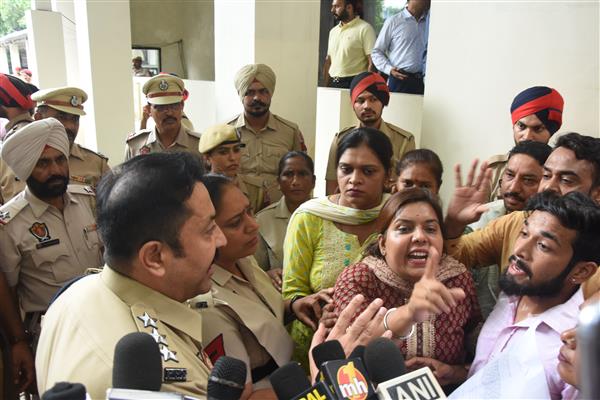 Family members of a travel agent argue with cops at the Police Commissioner's office in Ludhiana. Himanshu Mahajan

An uproar was witnessed at the Police Commissioner (CP) office on Friday when Shiv Sena led by its leader Rajiv Tandon came to protest here, along with complainants, to whom Ghai, a notorious agent facing over 100 cases of travel fraud, had allegedly issued fake visas.

On the other hand, family members of travel agent Ghai also reached the CP office and alleged that Shiv Sena was demanding Rs 10 lakh from them.

Situation escalated when both the parties started exchanging heated arguments. The police had to call extra force to calm down protesters and travel agent’s family members. The ACP, Civil Lines, Harish Behl, also rushed to the CP office to prevent clash between both the parties.

“We have met several complainants to whom Ghai issued fake visas and took lakhs of rupees. We want the police to register fresh cases against Ghai and help victims whose hard earned money has been gulped by the agent,” said Tandon.

Meanwhile, Ghai’s family members said they had submitted a complaint against Shiv Sena leader Rajiv Tandon, who demanded Rs 10 lakh bribe, but so far police had not conducted any probe in this regard. The ACP, Civil Lines, Harish Behl, said probe would be conducted into complaints of both the parties. Action would be taken as per the law, the ACP added.